In TRH(O)UGH, creation for 11 dancers, immobility becomes a synonym for death. The dancers rely on each other as if their movements carry a flame that cannot be extinguished by the storm in which they find themselves.

Rituals often serve as a special source of inspiration in my work. The starting point for THR(O)UGH was the Japanese ritual of Onbashira. The ritual takes place every six years near Lake Suwa in the Nagano Prefecture of Japan, for the symbolic renewal of the great shrine of Suwa. Here, men ride on steep tree trunks down steep mountain slopes and expose themselves to mortal danger. Onbashira is considered the most dangerous of religious rituals in Japan. This event sparked for me the contemplation of the power of rituals, of devotion, of the boundaries between the conscious and the subconscious, about states of danger, and about gravity as the connecting dimension in all of these phenomena. I have always been fascinated by everything cyclical; circles, forms of infinity, and centrifugal force. Working with New York based installation artist, Jim Hodges, we began developing a concept for a piece in which a huge cylindrical object dominates the space of the stage, and invites the dancers to interact with it. Through its form, it allows a variety of different readings. Including the image of a tunnel, and of a passage between two different worlds. Inspired by the tradition of Japanese Noh theater, the Hashigakari is a narrow bridge on the right side of the stage used by the actors for their performances. Hashigakari means “Suspension Bridge” and represent the supernatural which connects the two different worlds on one plane. Jerome Bosch’s The Ascension to Heavenly Paradise, a painting that I’ve kept constantly in mind during the artistic process, also represents a path to the mythical hereafter. Then the mythological undertone was met by a harsher reality …

On November 13, 2015, I found myself standing less than 3 meters to the right of one of the terrorists on the Rue de Charonne in Paris, when he rather abruptly began to fire on just about everything. I certainly owe my life to the fact that I listened to my instincts, which miraculously released me from the frozen numbness which had plunged me into the scene that was playing out before my eyes. I ran faster than I had ever done so before in my life. 19 people who had been sitting in a café across the street died while I was running. The next day, I saw two bullet holes in the window directly adjacent to where I was standing when the shooting started. That’s when I realized the lucky accident – the fact that I’m still alive. Since that experience, shattering and unsolvable questions relentlessly occupy my thoughts. How can one be absolutely present in one moment and disappear so abruptly in the next? Where does the soul vanish to? Where would I be now, would I not have understood in time what was happening? Why did I survive and others did not?
It became completely impossible to exclude all these questions from the creative process, so I decided to consciously integrate them into the piece. Just as mythology has always been a means of exploring mysteries, so has this creation become my means of representation. Like a catharsis, I used these questions to process the non-erasable images and appease a shattered mind to bring the darkest memory of my life into another light. The tunnel that we originally created for this piece, should now become a beacon that points the way to tormented souls in the storm. A wave that can break above you, or one which can save you.

In TRH(O)UGH, immobility becomes a synonym for death. The dancers rely on each other as if their movements carry a flame that cannot be extinguished by the storm in which they find themselves. Similar to an Onbashira ritual, the stage becomes a place of danger, which manifests in much more artistic means. The composer Christian Fennesz has created a nervous sound world that evokes an atmosphere of chaos. Like adrenalin or an electric shock, the music influences the rough movements of the dancers. They combine energies that come close to those in real life-threatening situations. Their corporeality alternates between crash-test dummy and ghost-figure. Virtuose, random, incandescent, and always on the verge of control and derailment, they are ecstatic in the face of gravity. Their clothing (once again by Jean-Paul Lespagnard) is testimony to an intense experience that has left its mark, testimony to what they have lived through collectively.
As Nina Simone sings “Who Knows Where The Time Goes”, time itself moves on, and an experience in Paris has changed the approach of my original idea. Of exploring the relationship between gravity and the subconscious.THR(O)UGH is infused with the energy of escaping an unpredictable life-threatening situation, the exact moment when time and place determines our future.
Performances are rituals, and rituals have a function. On a personal level, THR(O)UGH has this one for me: it’s my first attempt to articulate something through the body that I still can not put into words.
I dedicate this piece to commemorate the victims of the November 13 raid in Rue de Charonne and to Joanna My Altegrim, killed on March 22 2015, during the terrorist attack at Maelbeek Metro Station in Brussels.

“Thr(o)ugh’ was nominated for best choreography at The German National Performing Awards “der Faust” in 2017. 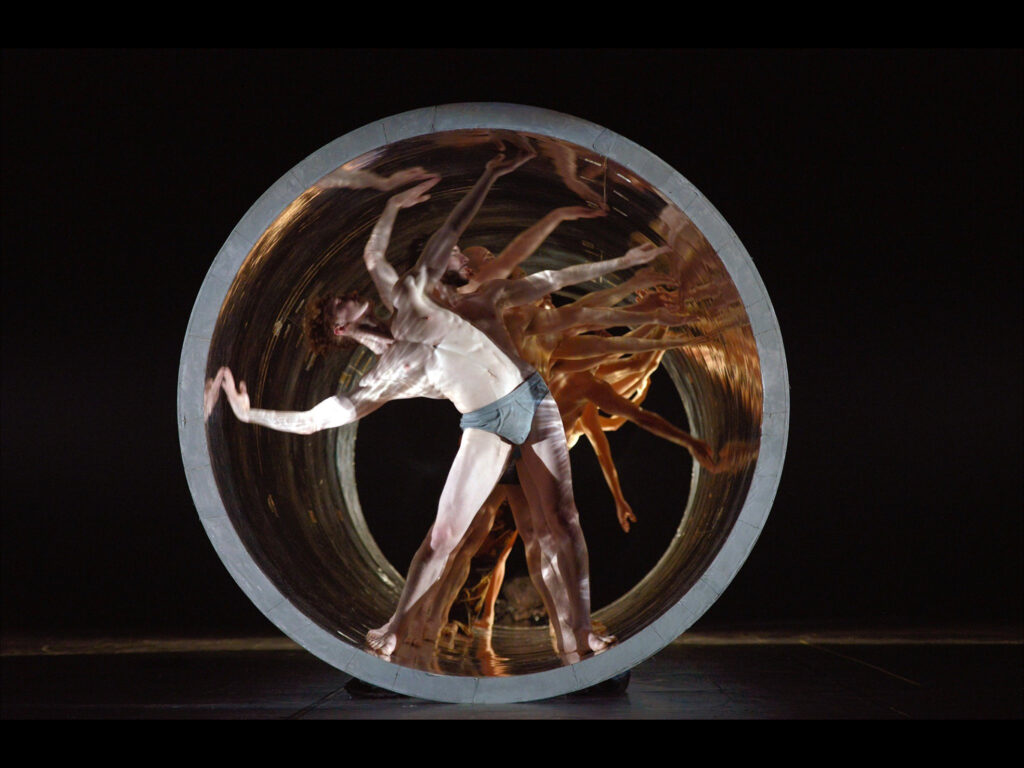 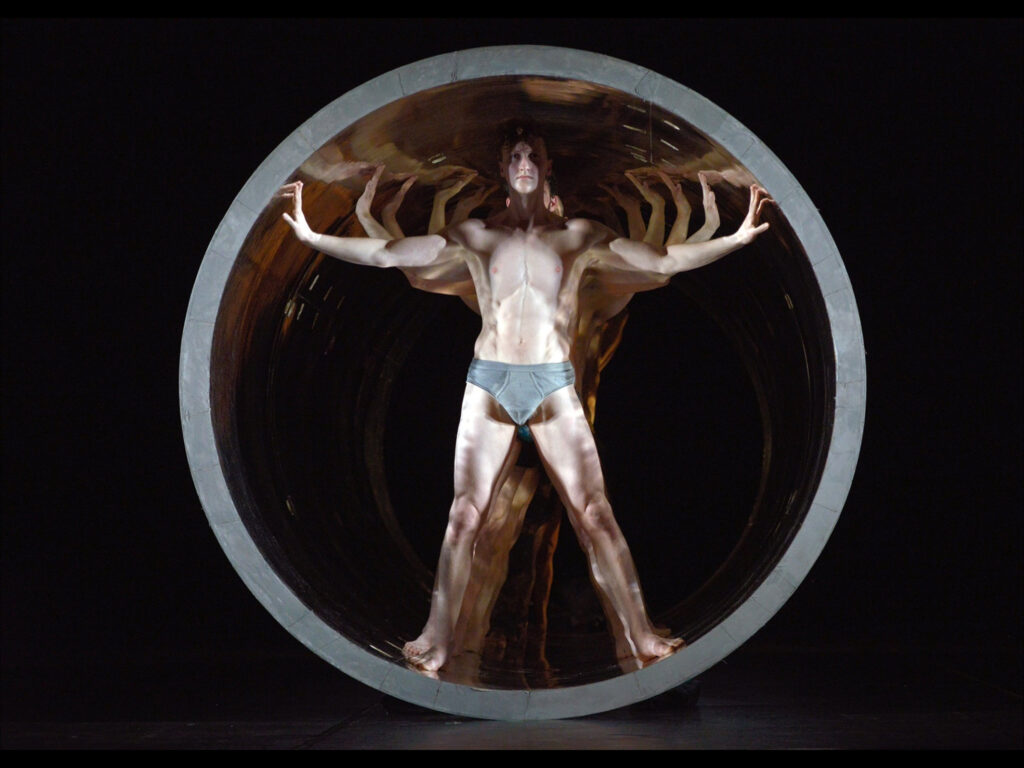 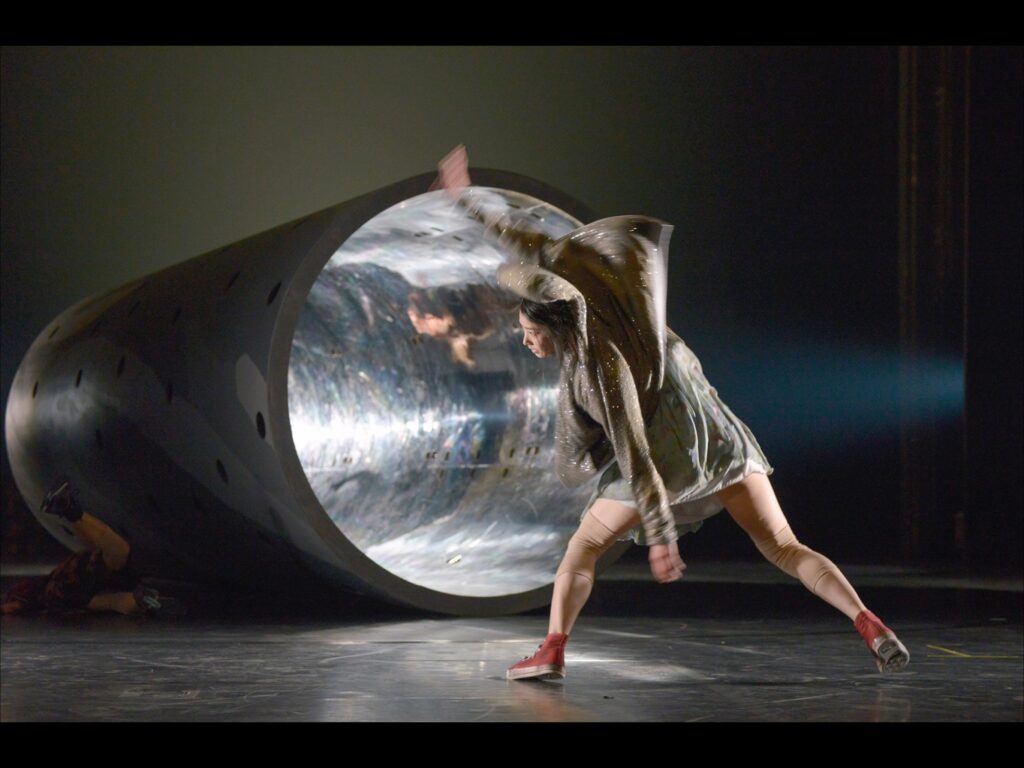 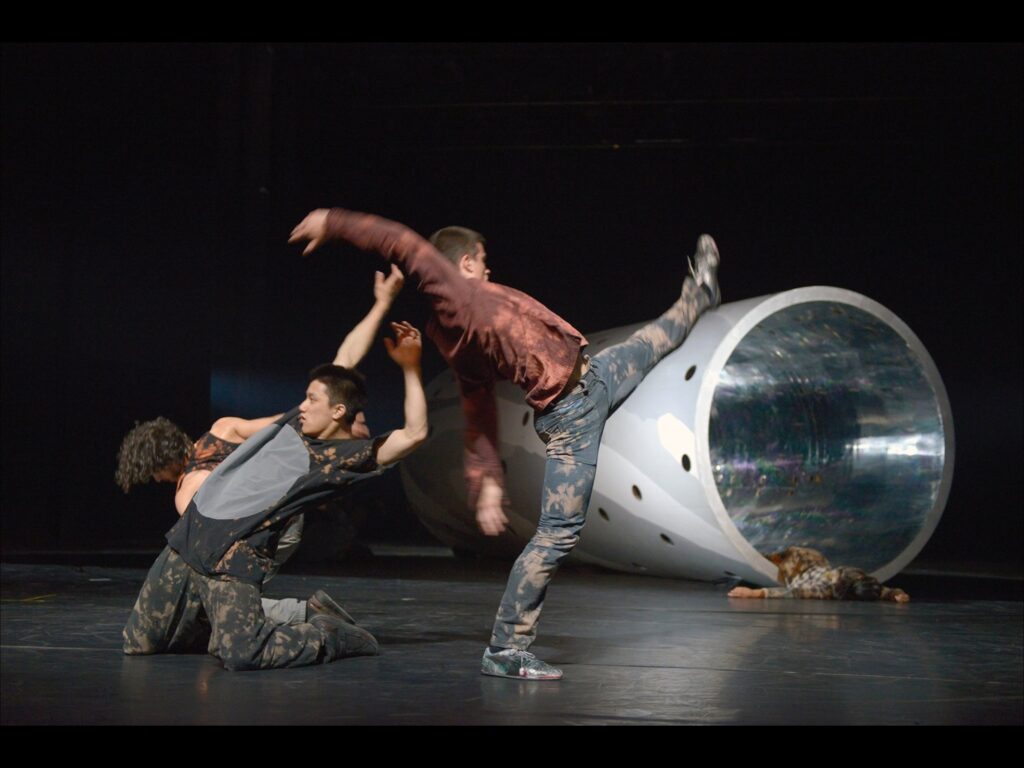 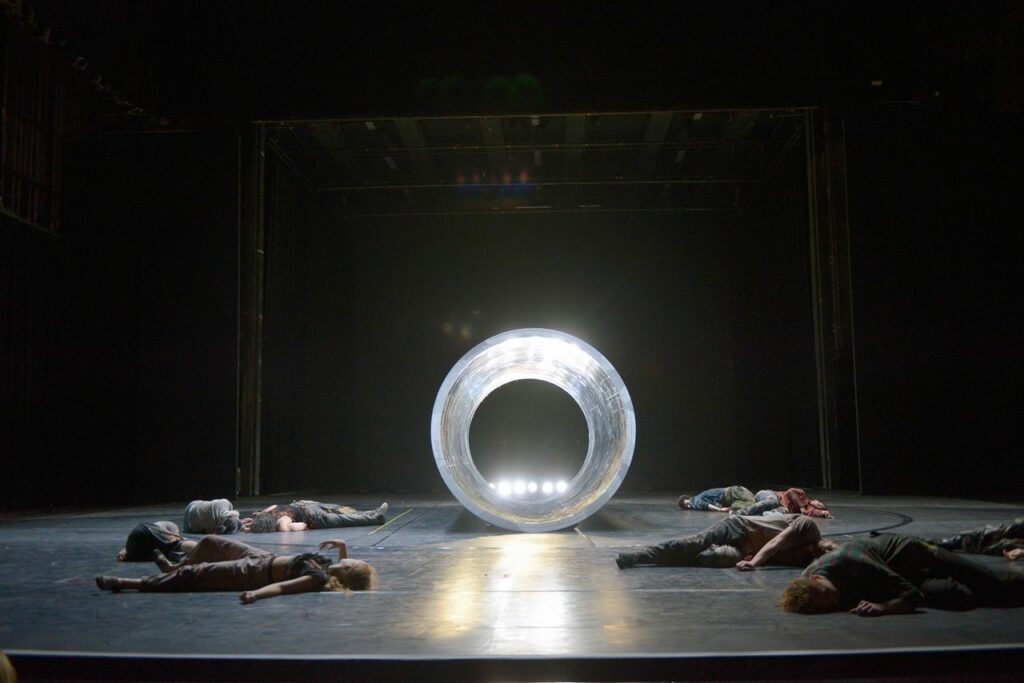 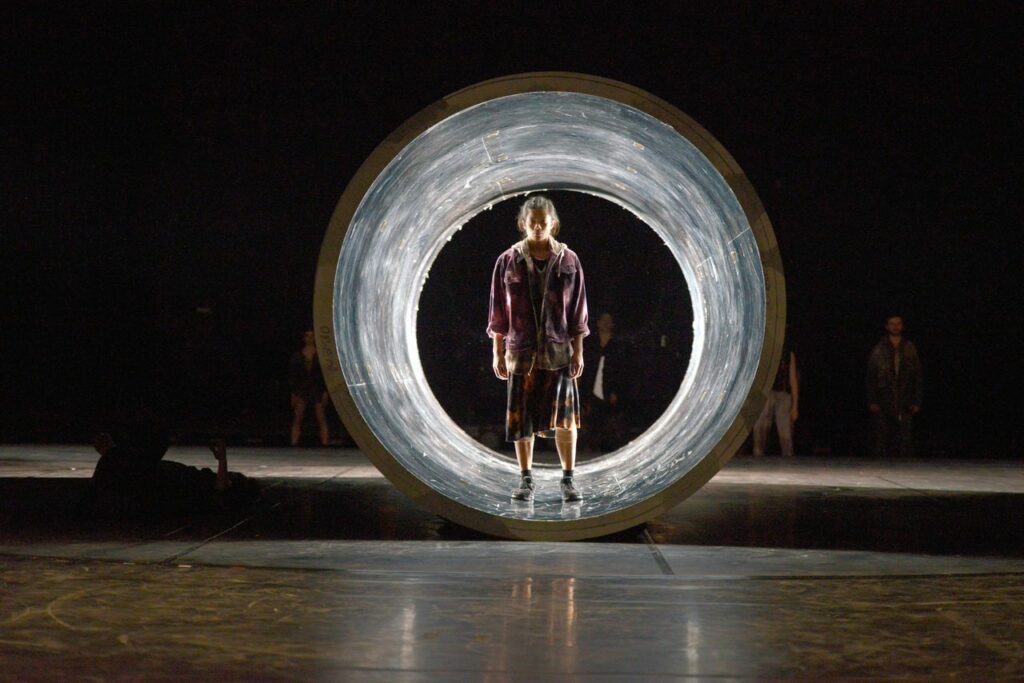 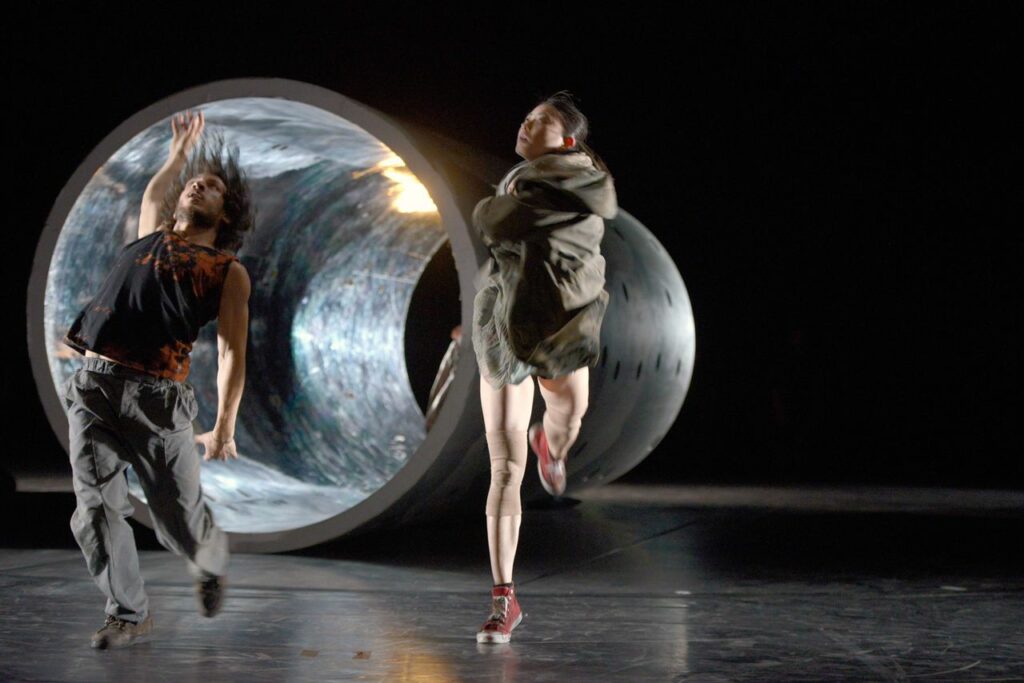 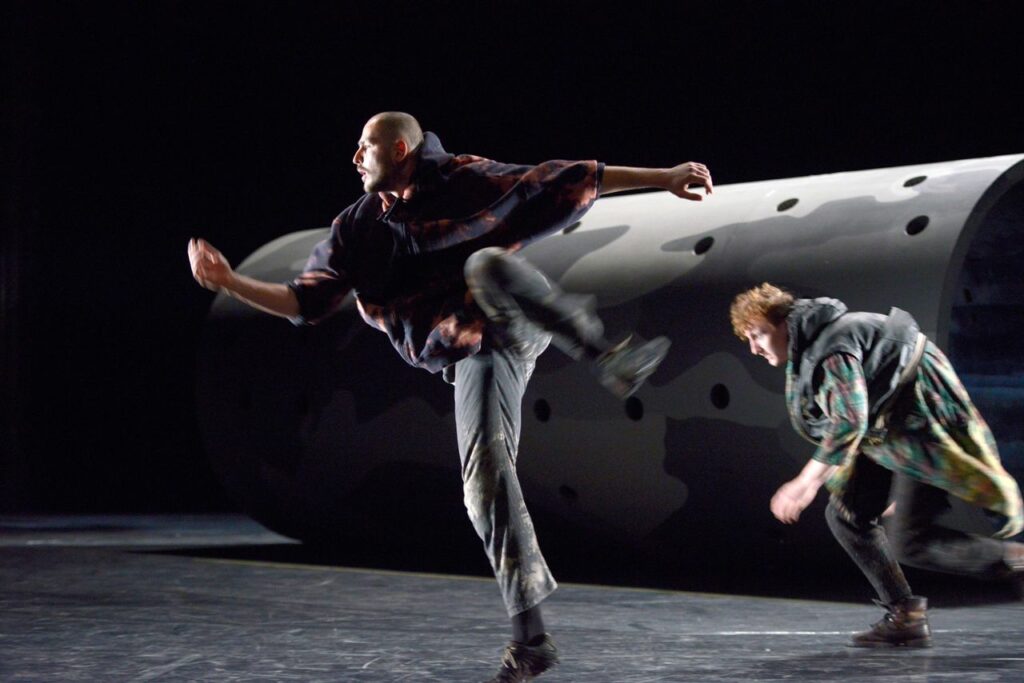 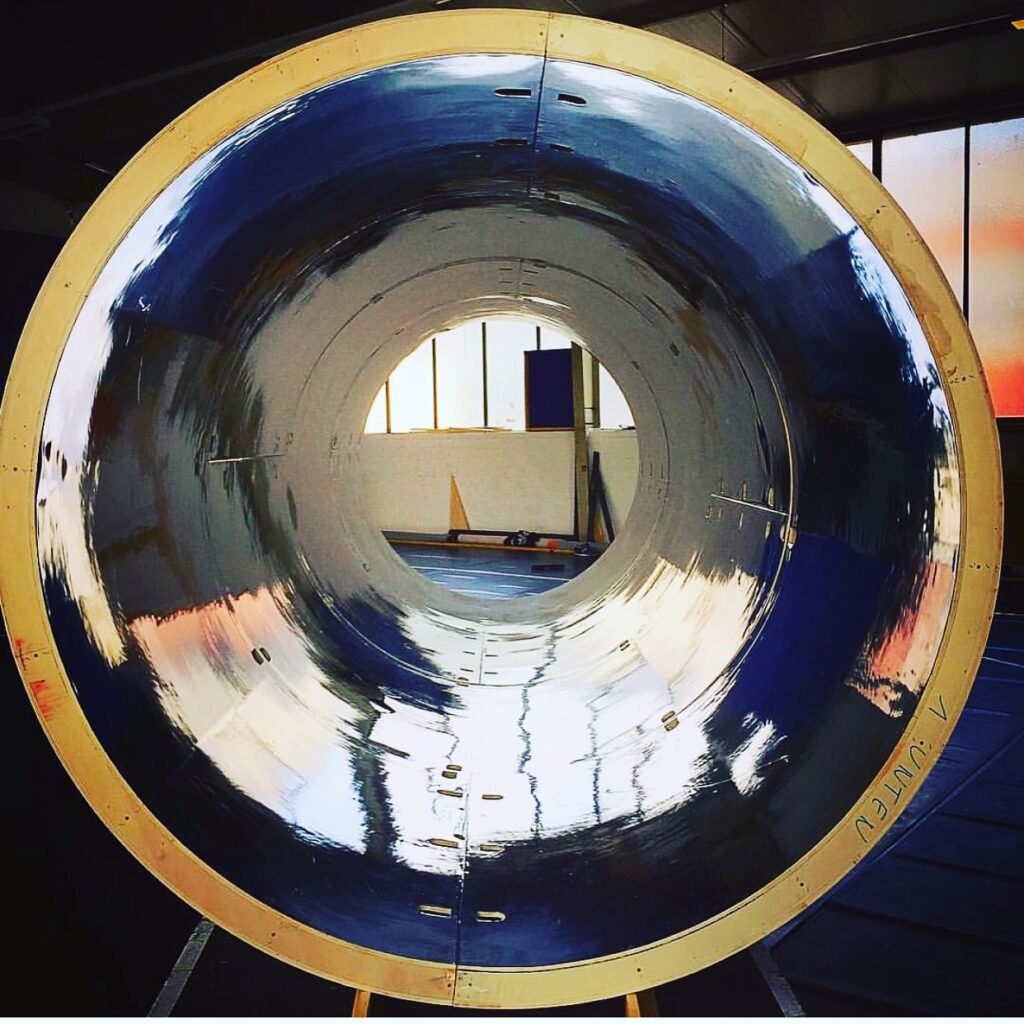 The artistic performances of the ensemble are enormous…

…At the end of almost forty minutes of sensational performance, the ensemble stand in a line in the cylinder. Arms and legs of the dancers, their whole bodies overlap, merging into one, as if the “Vitruvian Man” by Leonardo da Vinci would have suddenly come to life. Apotheosis of the human in a magnificent choreography.