A piece for the 38 dancers of Uk’s National youth dance company and a drummer.

From the 14th to the 18th centuries, reports of a strange mania spread through southern ltaly. Men and woman (though mainly women) were being seized by a wild compulsion to dance, for hours or even days on end. This uncontrollable hysteria was named tarantism, said to be caused by the bite of the wolf spider, Lycosa tarantula, and furious, frenzied dancing was the only way to expel the spider’s poison from the sufferer’s body. Tarantism and its associated dance, tarantella, was at the forefront of choreographer Damien Jalet’s mind when he was invited to become Guest Artistic Director of the National Youth Dance Company for 2017. He saw that this group of young dancers gathered from a round the country who come from hugely diverse backgrounds and have trained in different styles, from ballet to hip hop to contemporary, shared one great passion: the drive to dance. “

“Watching them, it seems they are completely obsessed with the idea of dancing,” says Jalet, during a break in rehearsals. He likens the young dancers’ compulsion to the medieval ltalians possessed by the tarantula’s bite. “They can work for eight hours a day and they will still keep on dancing till midnight. lt’s like they cannot stop doing it. lt’s taken control of them.” lt’s true that from the moment the dancers come through the doors of the studio in the morning, they don’t stop moving. A gentle group warm-up turns into energetic disco moves and a pogo-ing rave; in breaks, they practice repeatedly, share steps with each other, bound around in spare studios with iPods blasting; they pull each others’ bodies into elastic stretches and massage aching muscles, eager to do it all over again. ln Tarantiseismic, the title for Jalet’s creation for NYDC, the obsession of tarantism has collided with the seismic force of an earthquake, to reflect the idea of dancing on shaky ground: 39 teenagers navigating the frustrations, revelations and challenges of an uncertain world.

We make mistake, Jalet says, to think of young people dancing as something ‘cute’, or ’nice”. “We forget, sometimes, that a lot of them are dancing with rage, or as a way to transcend reality,” he says. “lt’s a bit of a life or death thing.” ln tarantism, it is dancing that heals the body from the poison that floods it, an exorcism of sorts. “The way they relate to that idea is immediate,” says Jalet. “They completely get it. l’ve been asking them to collect a series of words: what feels poisonous to you? What would you like to expel out of yourself?”

ln dance, tarantella is a word we tend to associate with ltalian folk dance, or a cheery, virtuoso ballet variation with a tambourine. But this is something altogether more primal. “I think tarantella deals a lot with a sense of abandon, a freedom in movement. the idea of surrendering and through the movement letting your state be changed,” says Jalet. Choreographically, Jalet is fascinated by the concept of gravity, and its very real impact as a physical force on the dancer’s body. (The piece Gravity Fatigue that he made with designer Hussein Chalayan for Sadler’s Wells in 2015, was also consciously shaped by gravity’s pull.) He wants the dancers to use gravity to induce the feeling and appearance of unconsciousness. “You need to surrender to gravity,” he says.

ln rehearsal, there’s no restraint to the dancers’ untamed, flailing movement, launching themselves into the air then plunging to the floor, feet sliding skilfully underneath their bodies (knee-pads essential), long hair is flying , loose limbs are flung as if out of control except, of course, you couldn’t execute any of this without an immense amount of control. Jalet has travelled widely in lndonesia and Japan and has been inspired by the rituals he learned about there. « l’m thinking about the first function of dance,” he says. “Where did it come from, to what is it connected? For me, performance is always a ritual.” And while for the dancers of NYDC, there’s a huge intellectual and technical challenge in taking on this work: mastering the steps, the style, the complex rhythms created by composer and drummer Dave King, plus the fact of coordinating your movements with 38 other people on stage, nonetheless, performing the work is a kind of ritual for the dancers. lt’s something almost spiritual, Jalet suggests. « I feel for them there is a real quest. They want to transcend.” and transcendence , however, comes only as the result of a lot of hard graft. The dancers of NYDC meet for three intensive residencies over the course of the year . before the premiere , only four weeks in total to bond as a company and create a brand new work at a professional level For many of them it’s a major departure from anything they have done before. Jalet calls it “a revolution for a lot of them to work like this, the whole day, focusing Just on creating a work, collectively.” Their youth brings with it “an incredible freshness and passion” he says, even when he’s pushing the dancers far out of their comfort zones.

Jalet and his assistants, Aimilios Arapoglou and James O’Hara; are not just teaching steps – much of the choreography is created in collaboration with the dancers themselves – but focusing on how to generate particular qualities of movement, going beyond being good dancers to becoming artists. ln a very mixed group, different dancers inevitably struggle with different elements of the process, but Jalet has been enjoying watching their small epiphanies along the journey, and the way they’re celebrated by the rest of the group. “What l love the most is to see how when one person discovers something, the whole group goes ‘Yes!’,” he smiles. “lt feels like that dancer becomes a hero for a second. And this generosity -I wouldn’t say it disappears,but it definitely gets dimmed [later in a dancer’s career]. I don’t see competition, I feel a sense of real support,” says Jalet. “That moves me.”

World premiere the 19th of april 2107 at Sadler’s wells, London. 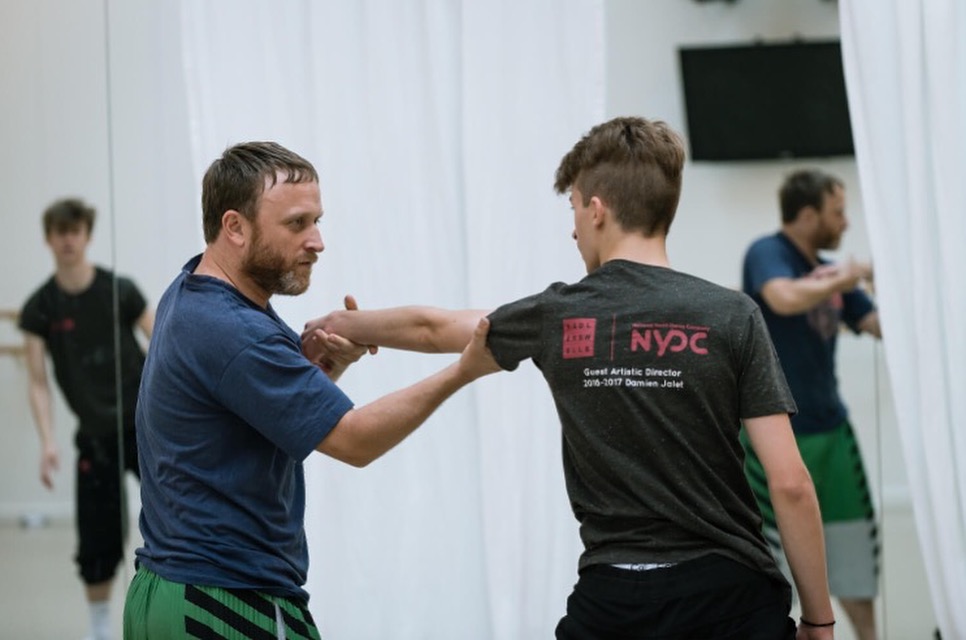 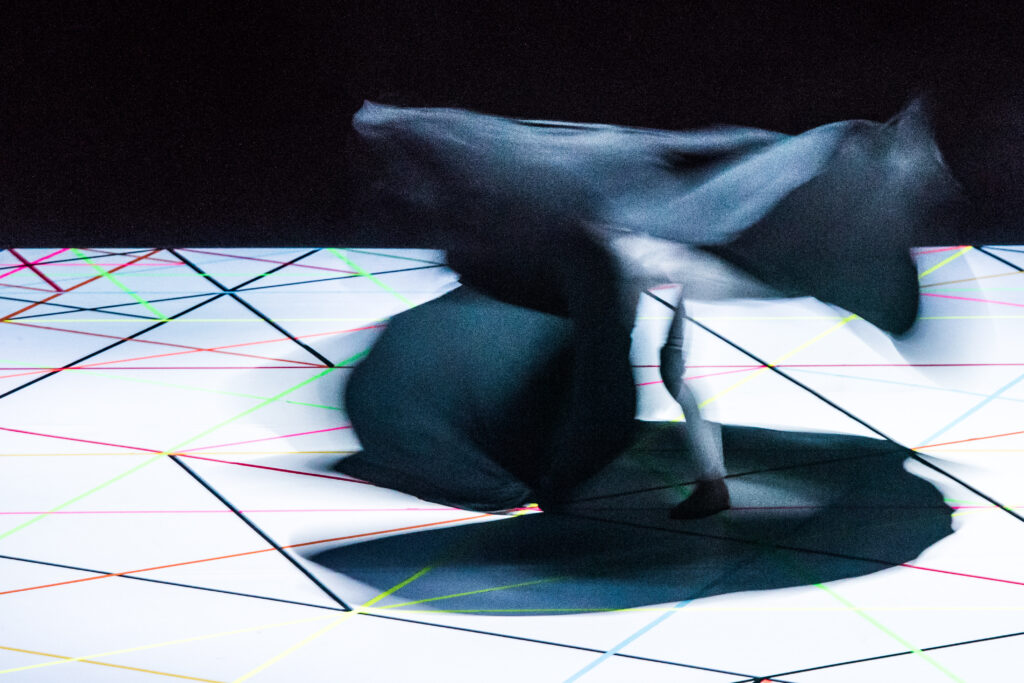 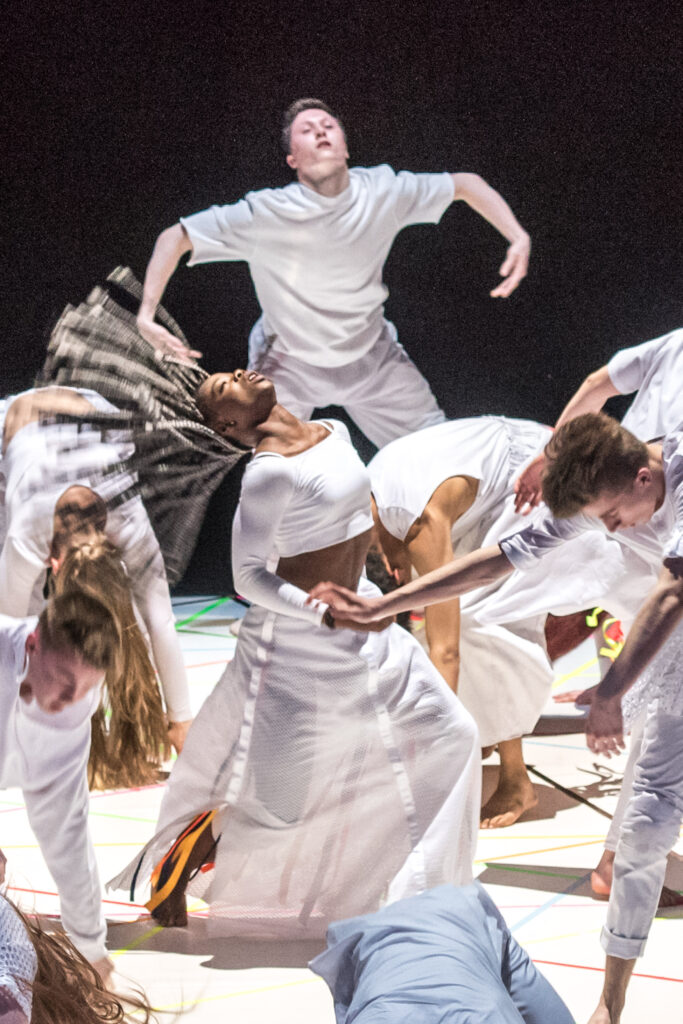 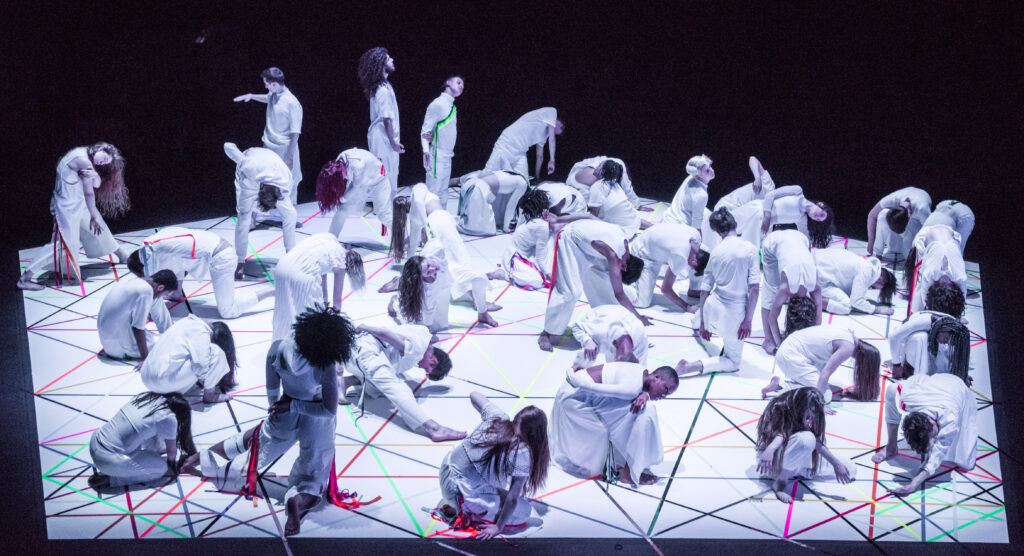 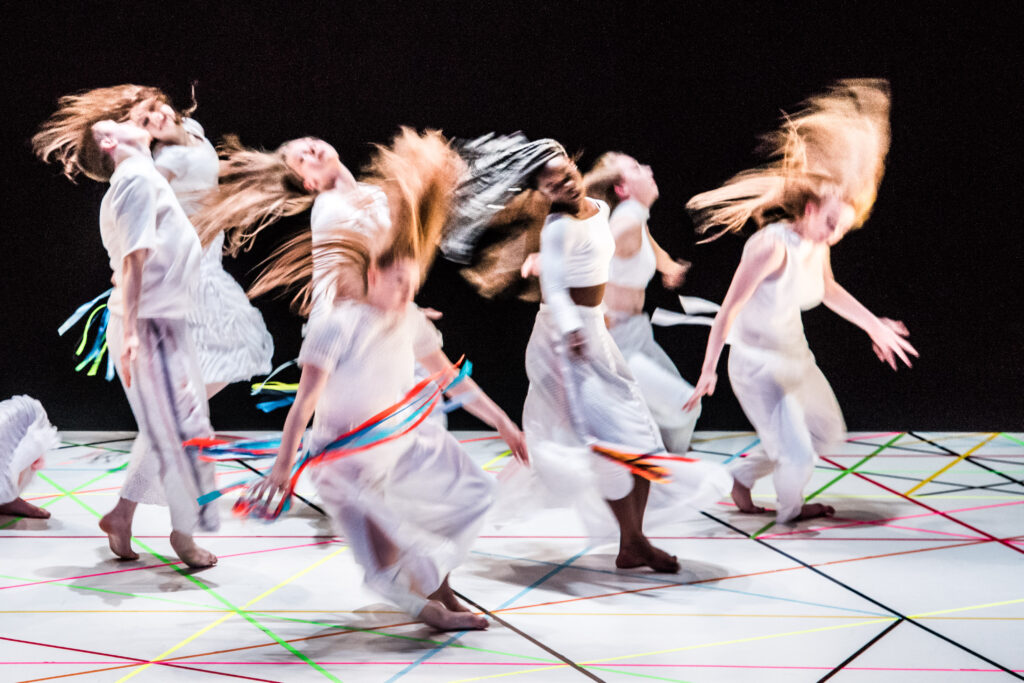 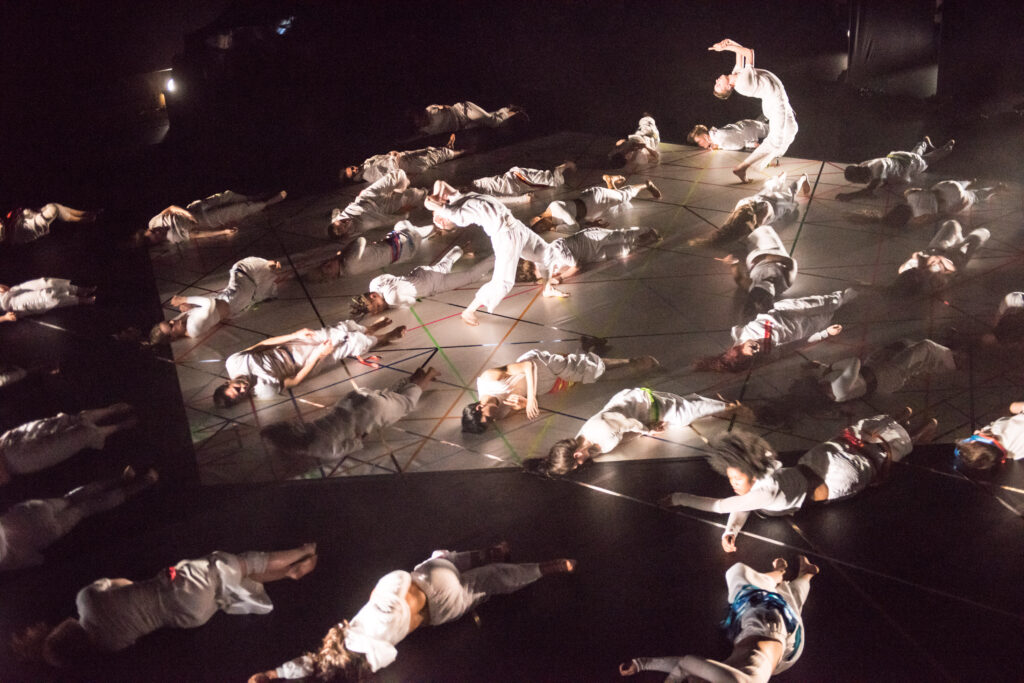 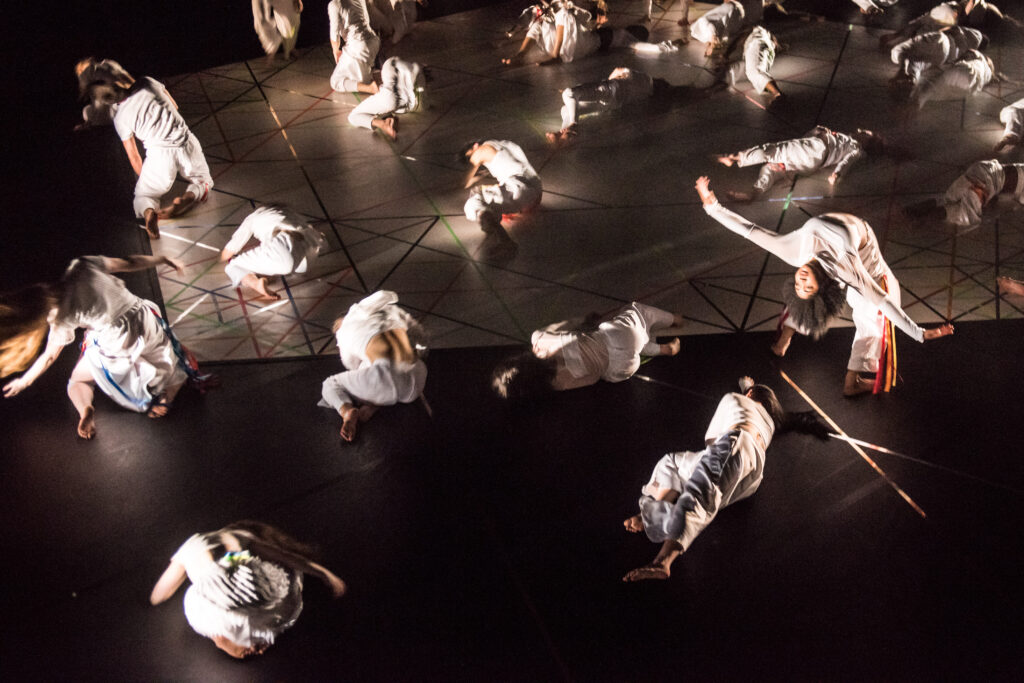 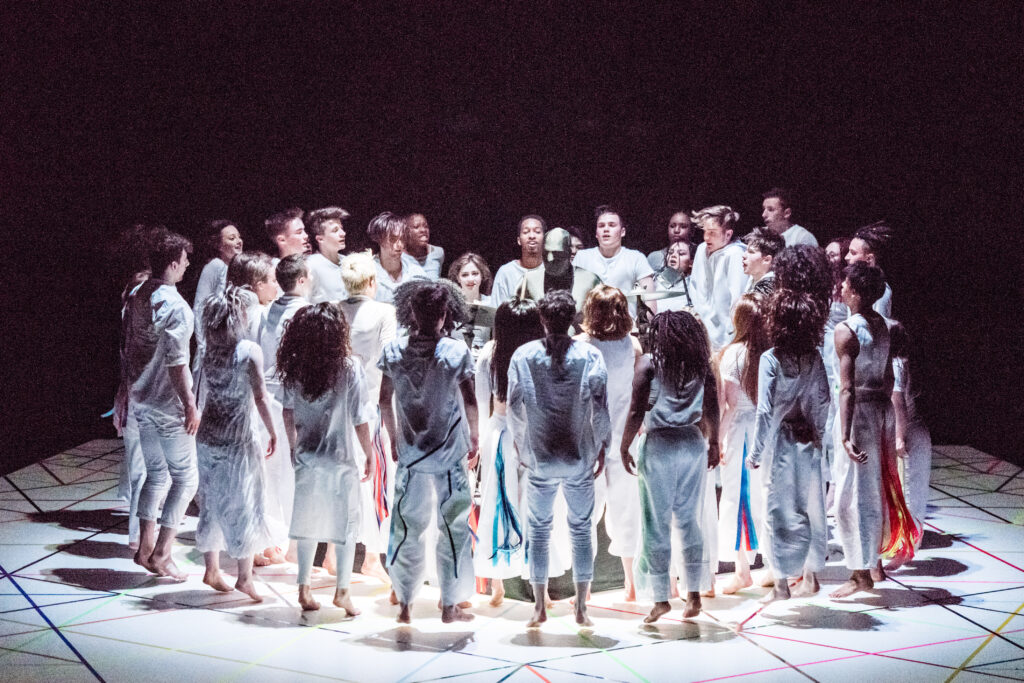 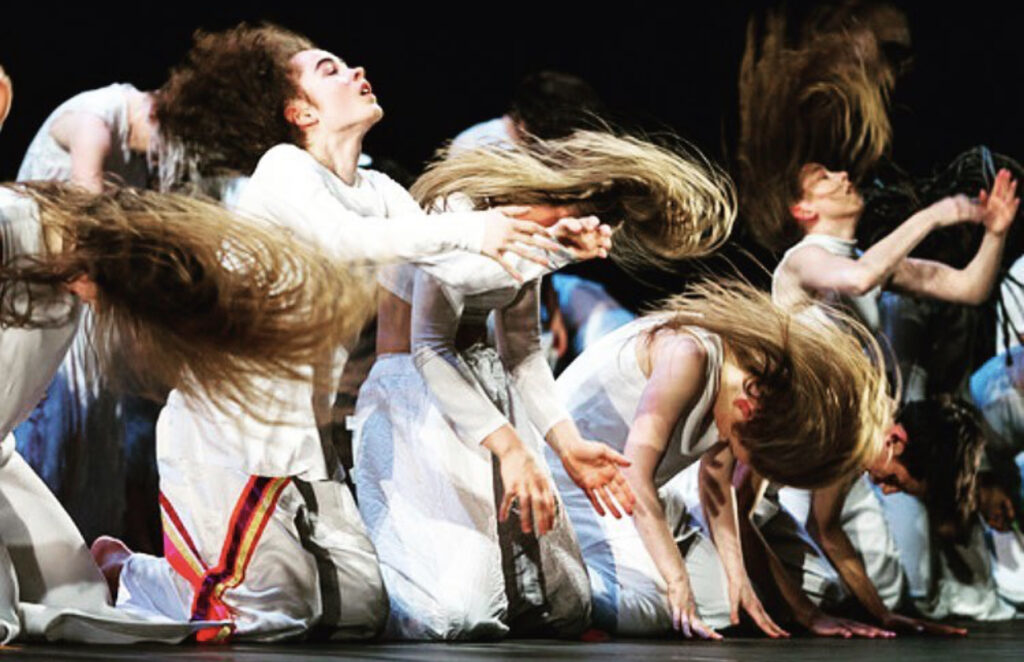 Overseen by the Belgian-French choreographer Damien Jalet, the fifth annual touring show from the National Youth Dance Company is a corker. A strong starting concept is passionately and powerfully embodied by 39 dancers, aged 15 to 22, from across the UK. Working together for only four weeks, spread across a year, they have been shaped into an impressive ensemble….Jalet’s cast dance as if possessed by elemental forces beyond their control. It’s exciting to watch, and sometimes vicariously exhausting — there’s no gainsaying their remarkable collective drive….The pressure-cooked movement is swift and deceptively floppy, but always there is the sense of an underlying purpose to the strenuously abandoned flinging and supplicatory flailing. Dancers leap and collapse, rolling on the floor like tumultuous ocean waves that vividly crest and subside.

..an overwhelming sense of visual spectacle and emotional resonance. In series of tightly packed phalanxes these performers again mutate between a variety of different states. At first, they become an undulating sea of audible breath, as they undergo a process of ritualistic repetition of an almost hypnotic nature. They then transition between well-rehearsed chanting (the relevance of the recited words is somewhat unclear) and moments reminiscent of desperation, grief, and prayer…Perpetual rotations not only result in a mesmeric display of physical virtuosity (made even more astonishing by the company’s status as a prevocational training initiative) but also in a finale that imbues all observers with an infectious joy that only dance can confer.

There’s a distinctly ritualistic tone to this work. A shared force exists between the 39 bodies that is enhanced as the drums drop away and the momentum builds again to the sound of their breath. The complex, rhythmic patterning draws them together in a very physical, almost primal, manner.the waves of movement that surge through this work may bind these 39 dancers together but, beyond that, it’s their clear passion for dance that unites them.