﻿A new take by director Luca Guadagnino on Dario Argento’s classic, where dance, this time, is of central importance.

Suspiria is a 2018 supernatural horror film directed by Luca Guadagnino with a screenplay by David Kajganich, inspired by the 1977 Italian film directed by Dario Argento. It stars Dakota Johnson as an American woman who enrolls at a prestigious dance academy in Berlin run by a coven of witches. Tilda Swinton co-stars in three roles, including as the company’s lead choreographer and as a male psychotherapist involved in the academy. Mia Goth, Elena Fokina, and Chloë Grace Moretz appear in supporting roles as students, while Angela Winkler, Ingrid Caven, Sylvie Testud, Renée Soutendijk, and Christine LeBoutte portray some of the academy’s matrons. The star of the original film, Jessica Harper , has a cameo appearance. Kajganich set the film during the so-called “German Autumn” of 1977 in order to explore themes of generational guilt in that country during the Cold War. The film’s other themes include motherhood, evil, and the dynamics of matriarchies.

Unlike the original film, which used exaggerated colors, Guadagnino conceived the visuals in Suspiria as “winterish” and bleak, absent of primary colors. The film incorporates stylized dance sequences choreographed by Damien Jalet, which form part of its representation of witchcraft. Principal photography took place in late 2016 and early 2017 in Varese, Italy, and in Berlin. The musical score was composed by Radiohead singer Thom Yorke, who took inspiration from krautrock.

In 2016 Luca Guadagnino reached Damien Jalet , after watching a video of the female trio “les medusées” created in Louvre Museum in 2013. This female trio piece found inspiration in the 70’s horror classic “Suspiria” from Dario Argento. It s to actually choreograph a new version of this film that Guadagnino calls Jalet. The two nearly immediately meet in Crema where Guadagnino is finishing his since then cult film “ call me by your name”. The Italian director is very specific about the importance of dance in this new version of the film : “ the magic is conveyed by the dance, choreography as a way to expel spells with lethal powers”. Jalet, who counts the original Suspiria as one of his favorite film, is immediately seduced by Guadagnino will to insert contemporary dance in the fibers of the film’s narrative . Nearly immediately, he gathers a cast of very powerful and unique female dancers, develop his trio piece “les medusées” into the group piece “Volk” that is at the centers of the film, and creates all the numerous choreographies of the film with the dancers and actresses Dakota Johnson, Tilda Swinton and Mia Goth . The shooting started in November 2016 in the late 19th century adandoned hotel “campo di Fiori” in the mountains of Varese, at the Swiss-italian borders and last for nearly two months .
Jalet ’s work for the film has been unanimously praised worldwide both by the press and the audiences . 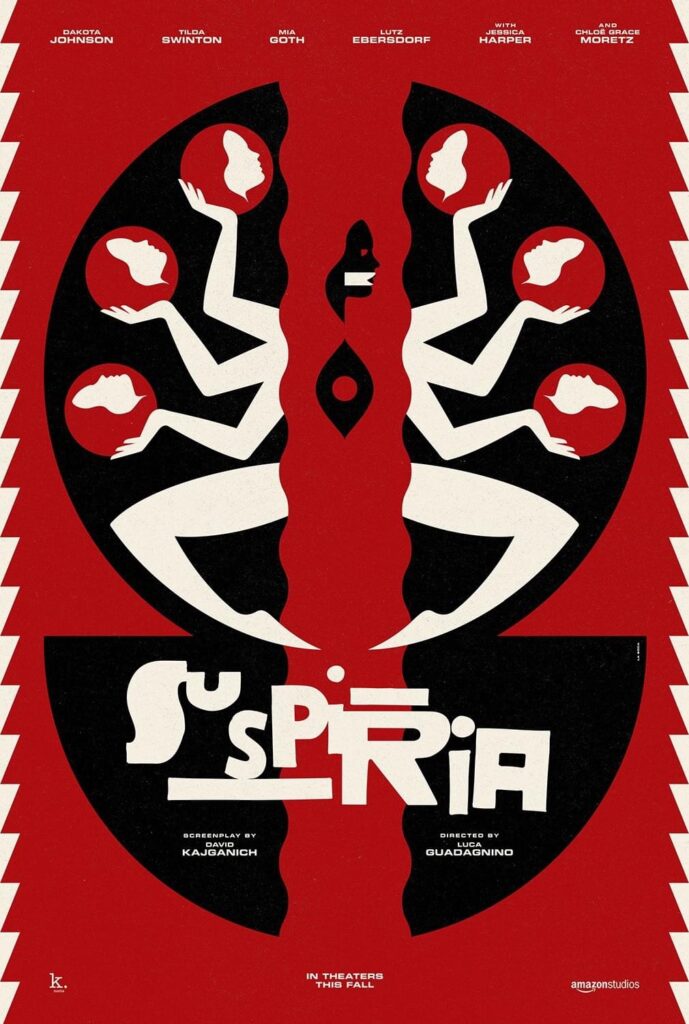 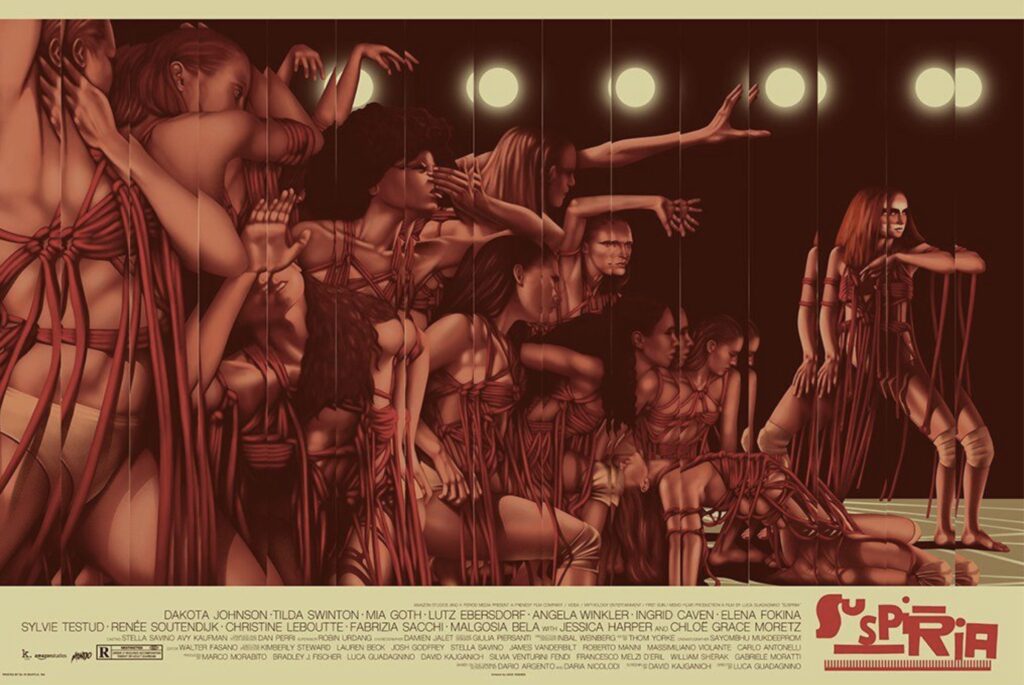 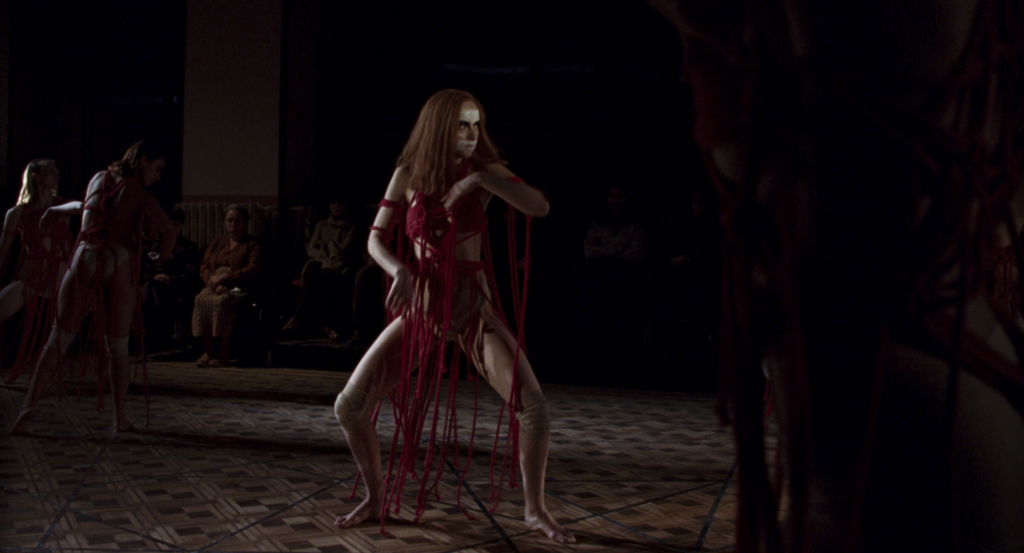 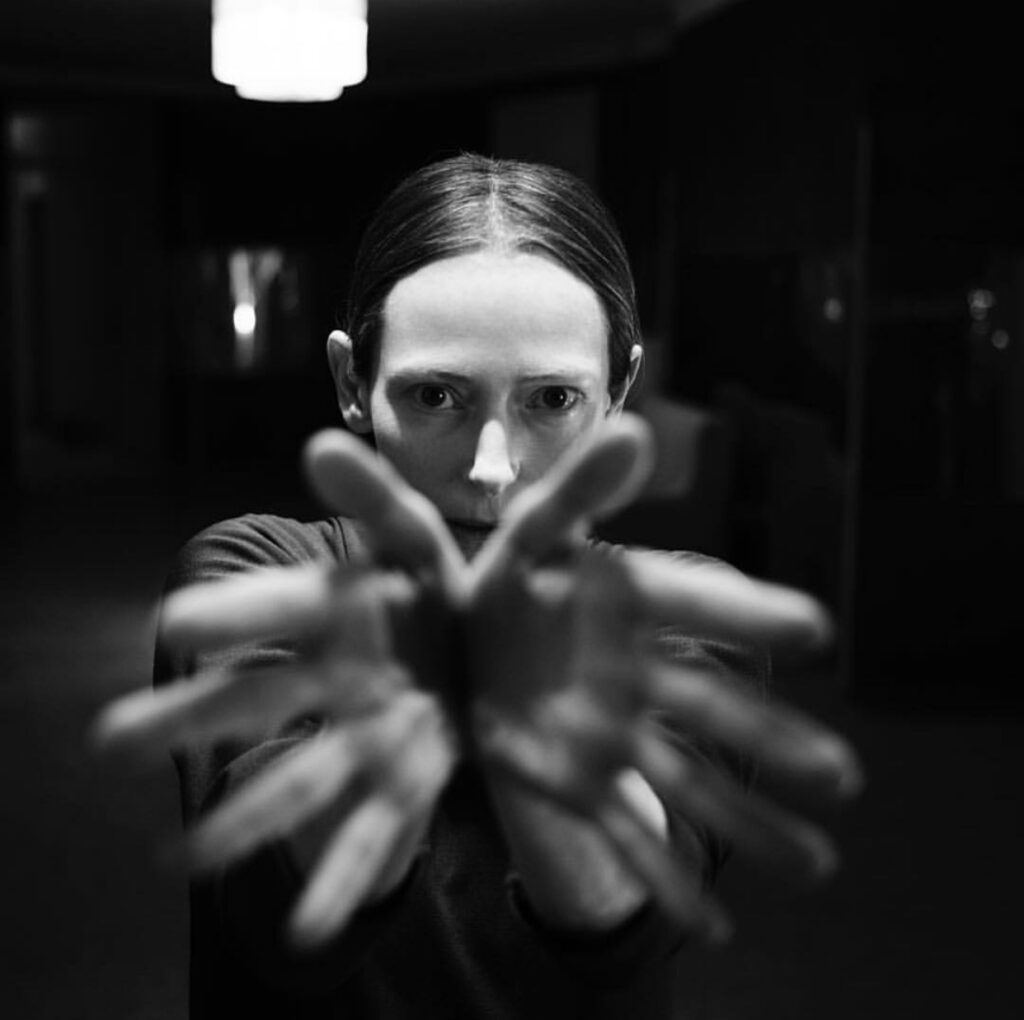 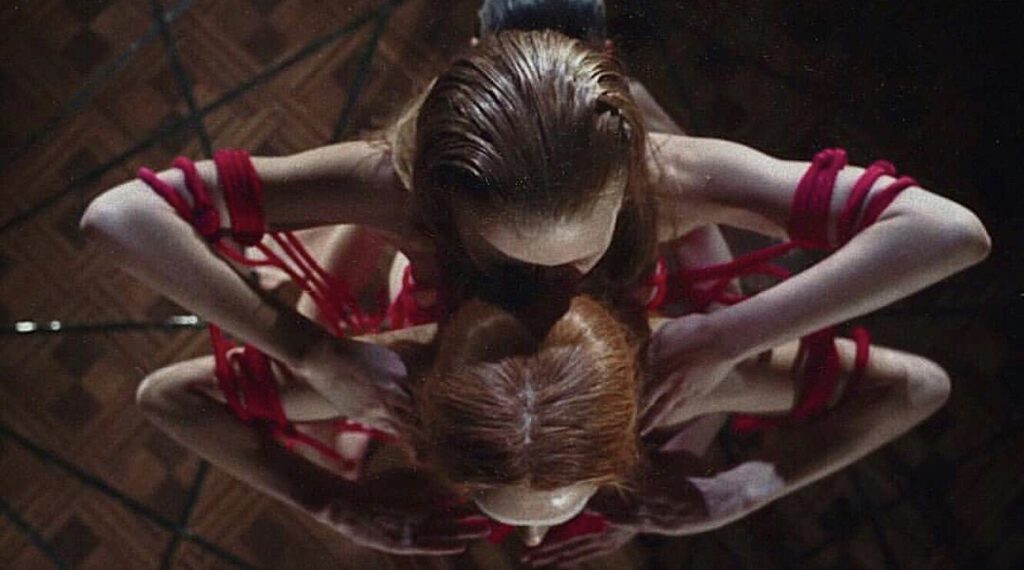 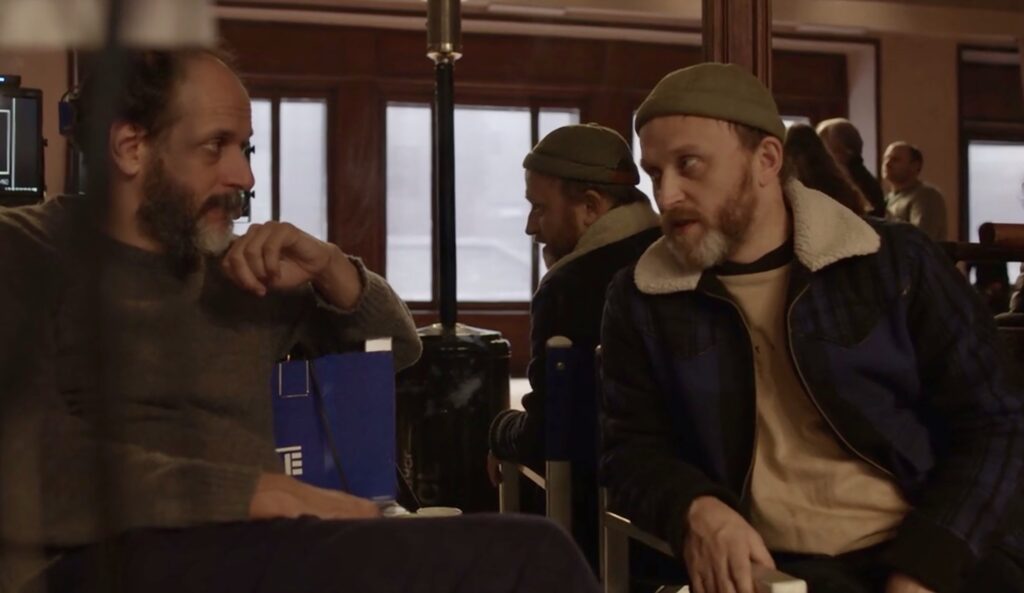 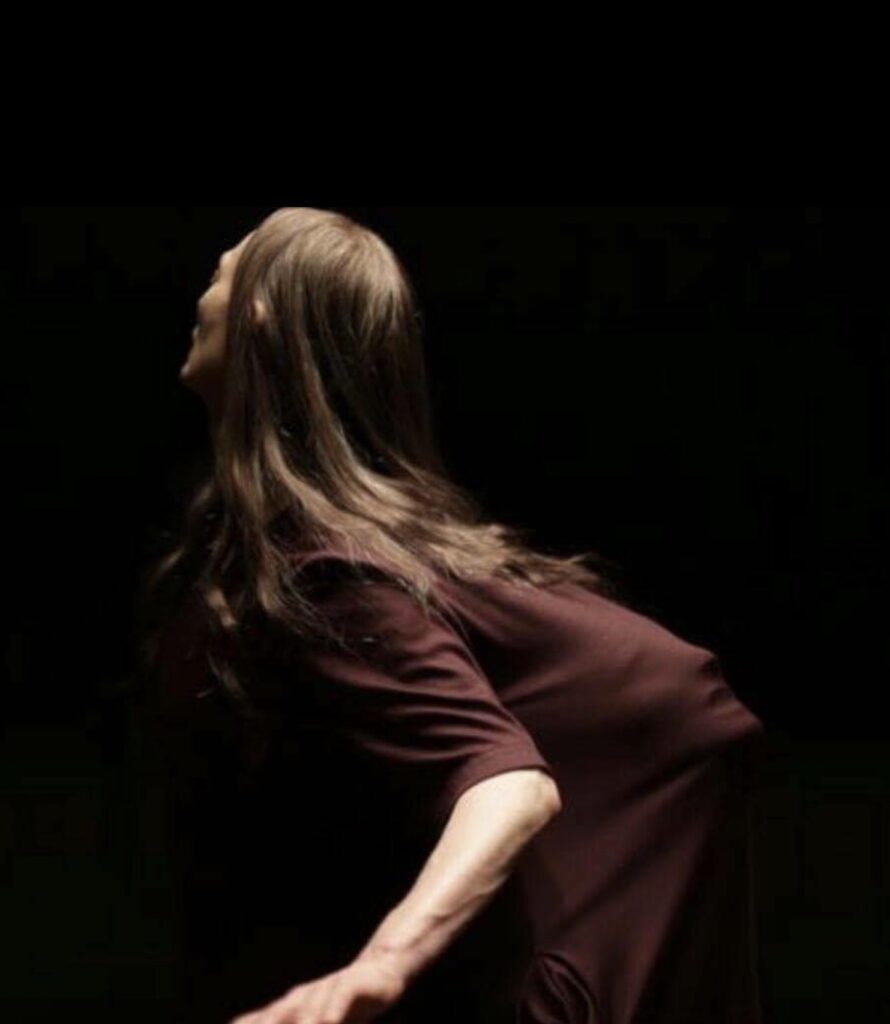 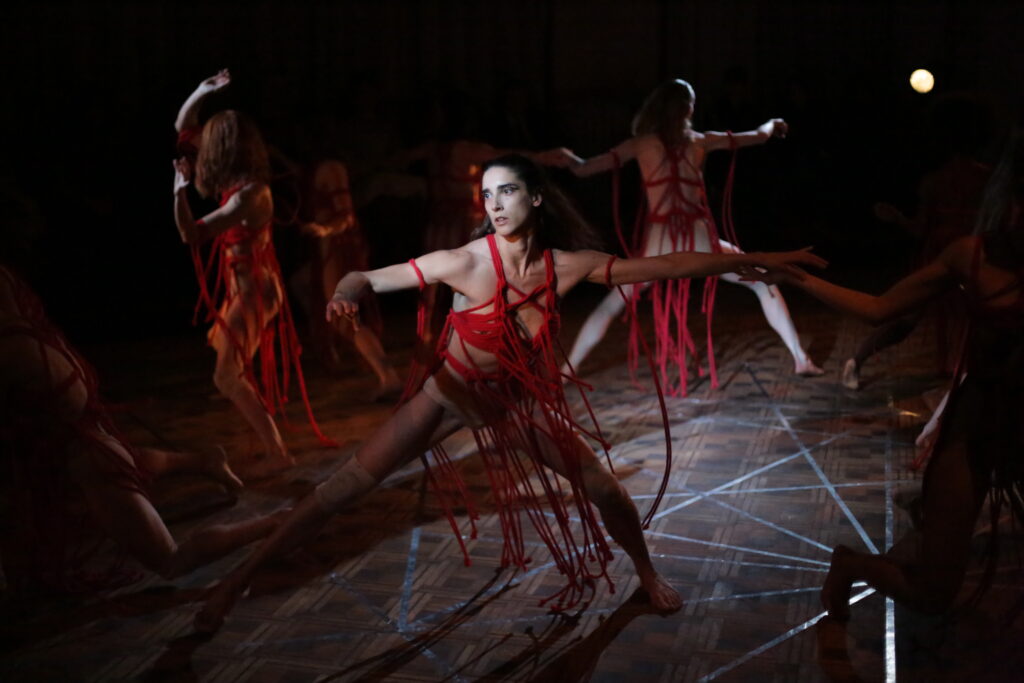 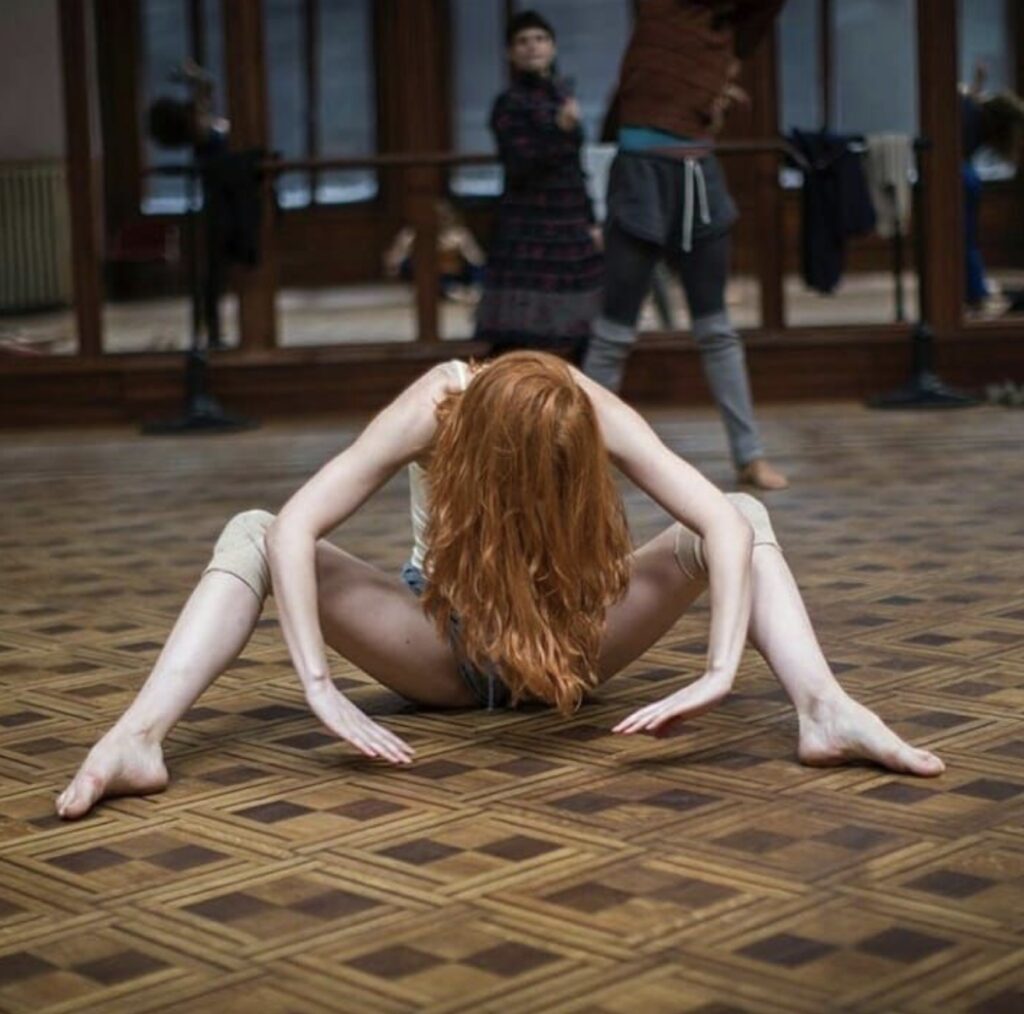 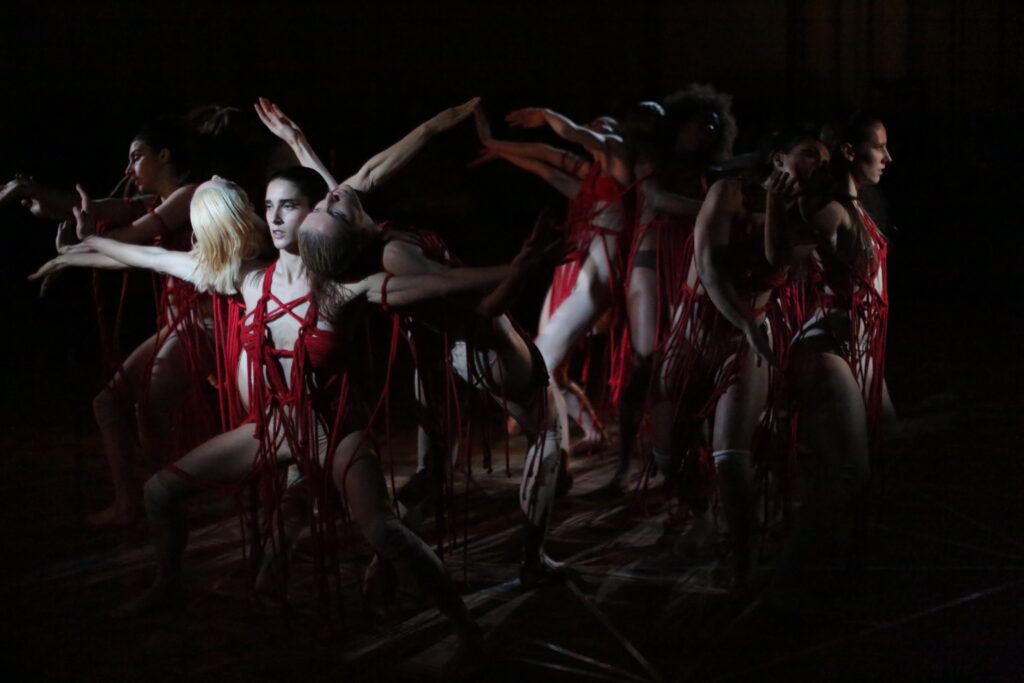 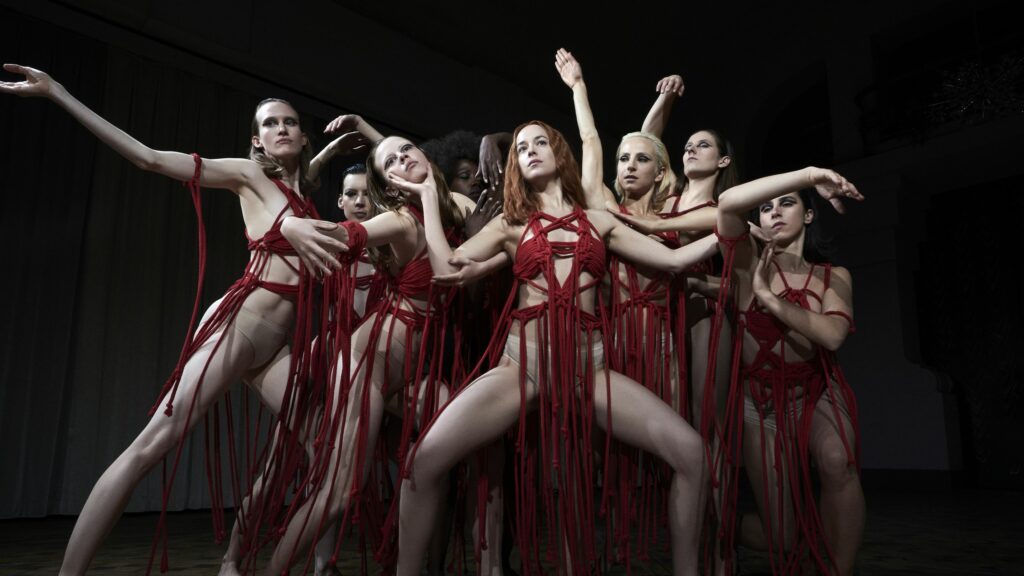 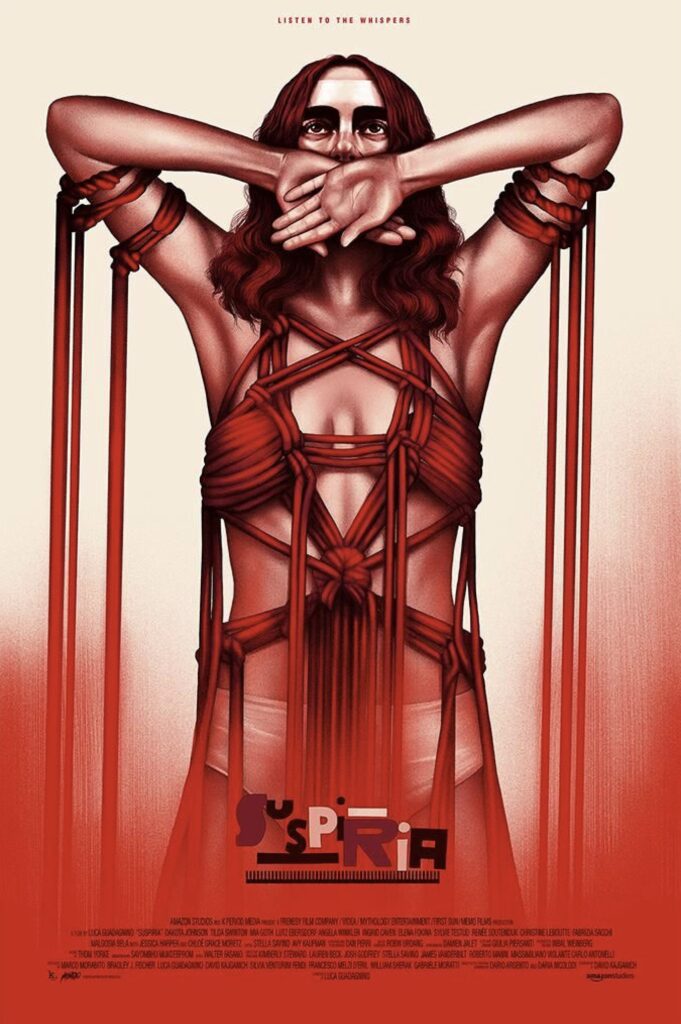 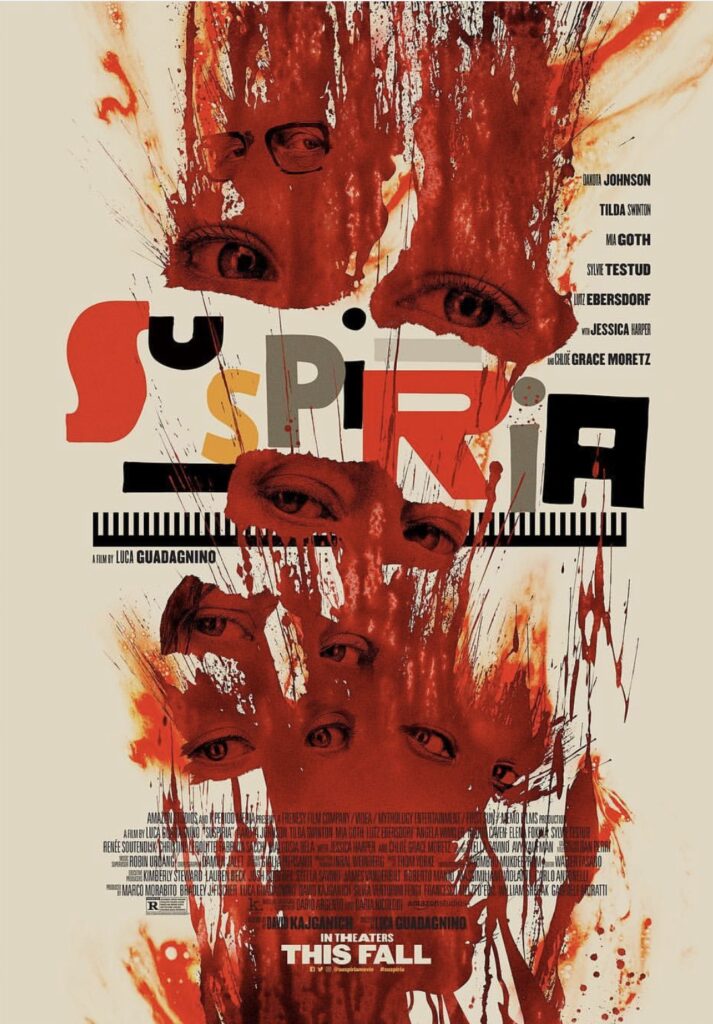 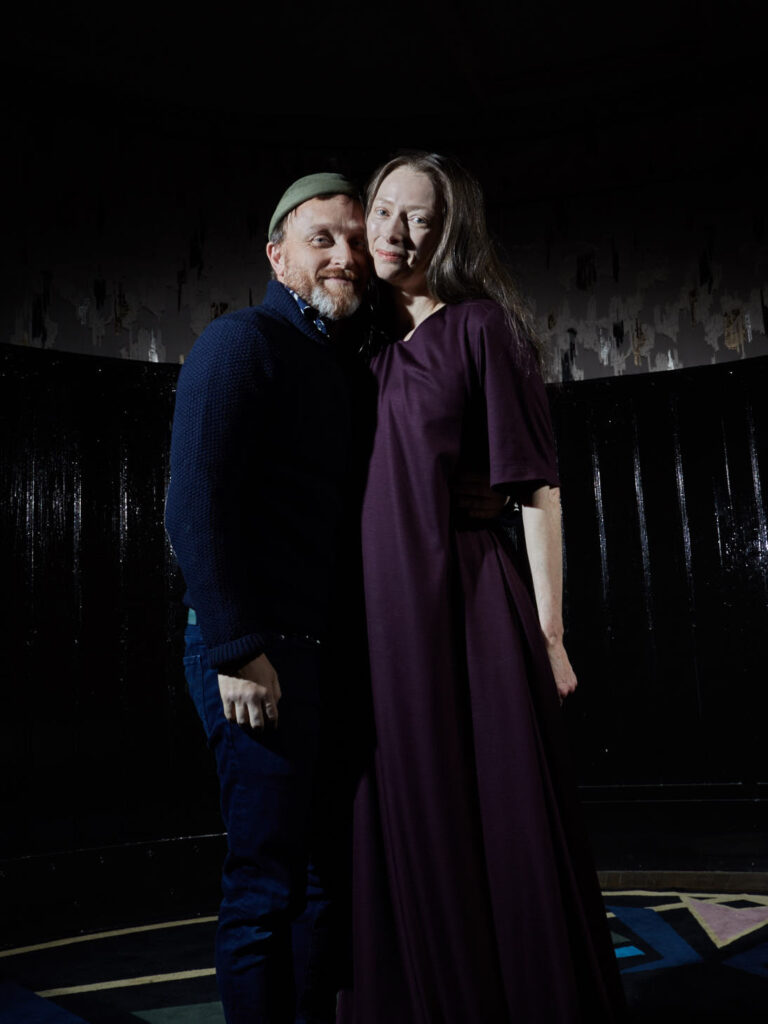 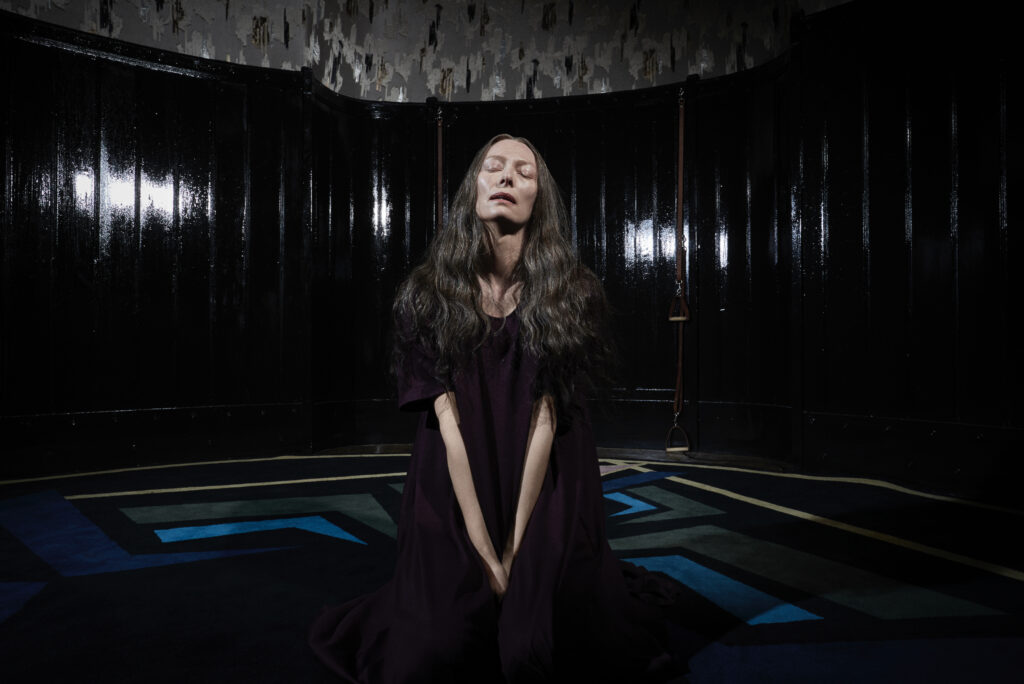 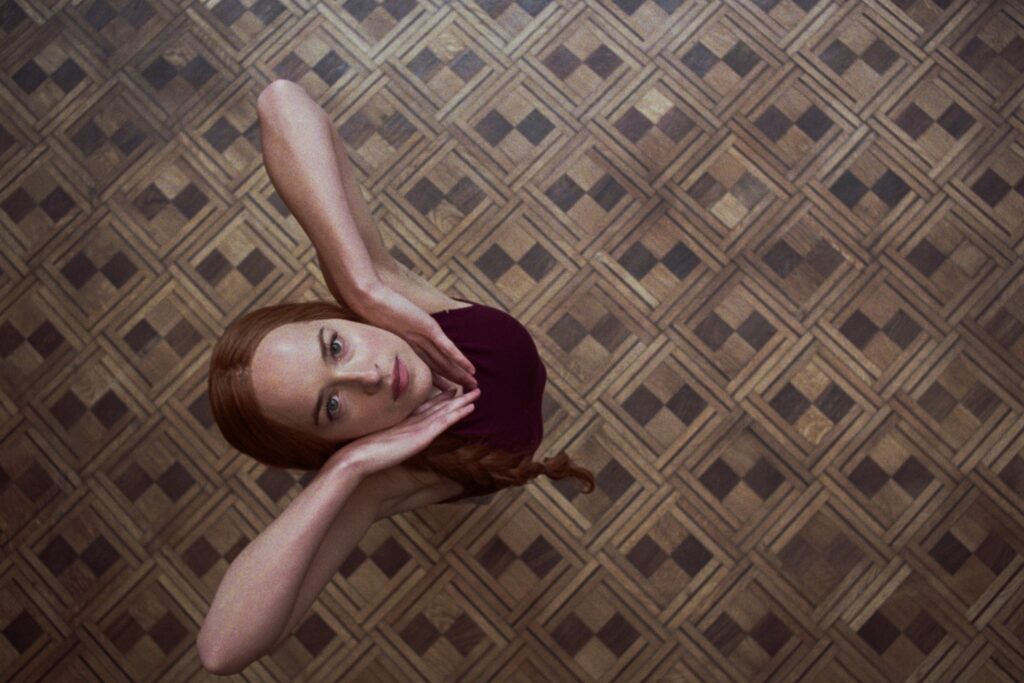 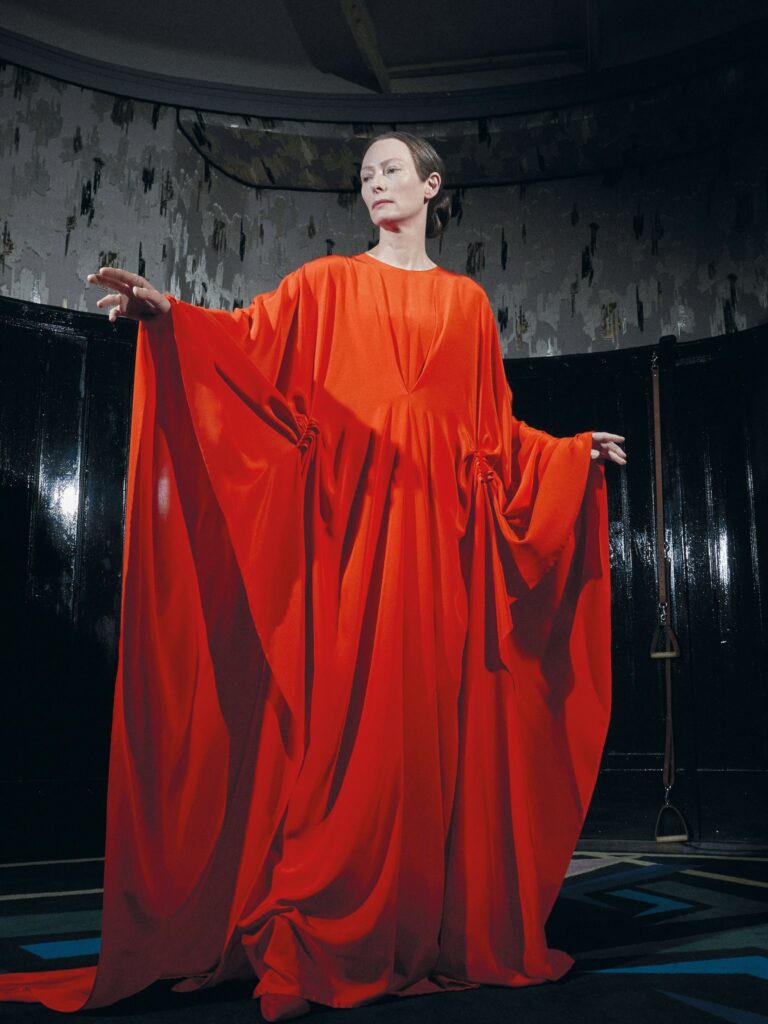 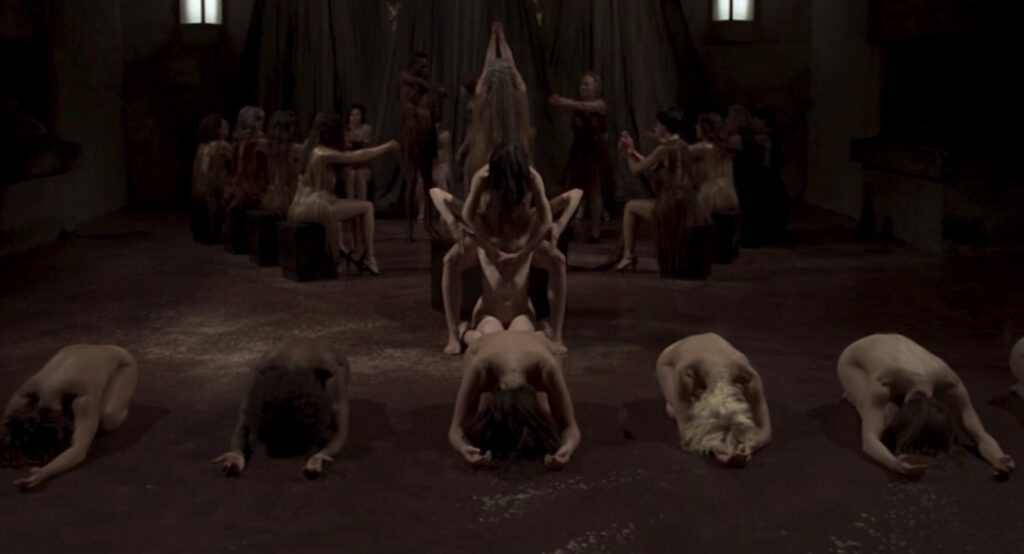 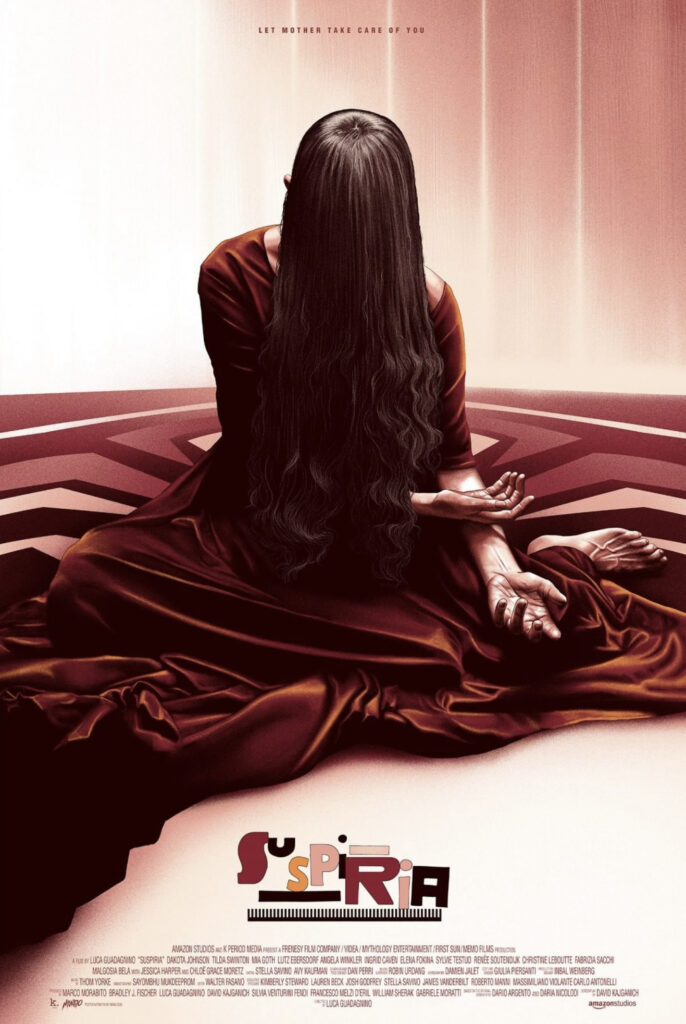 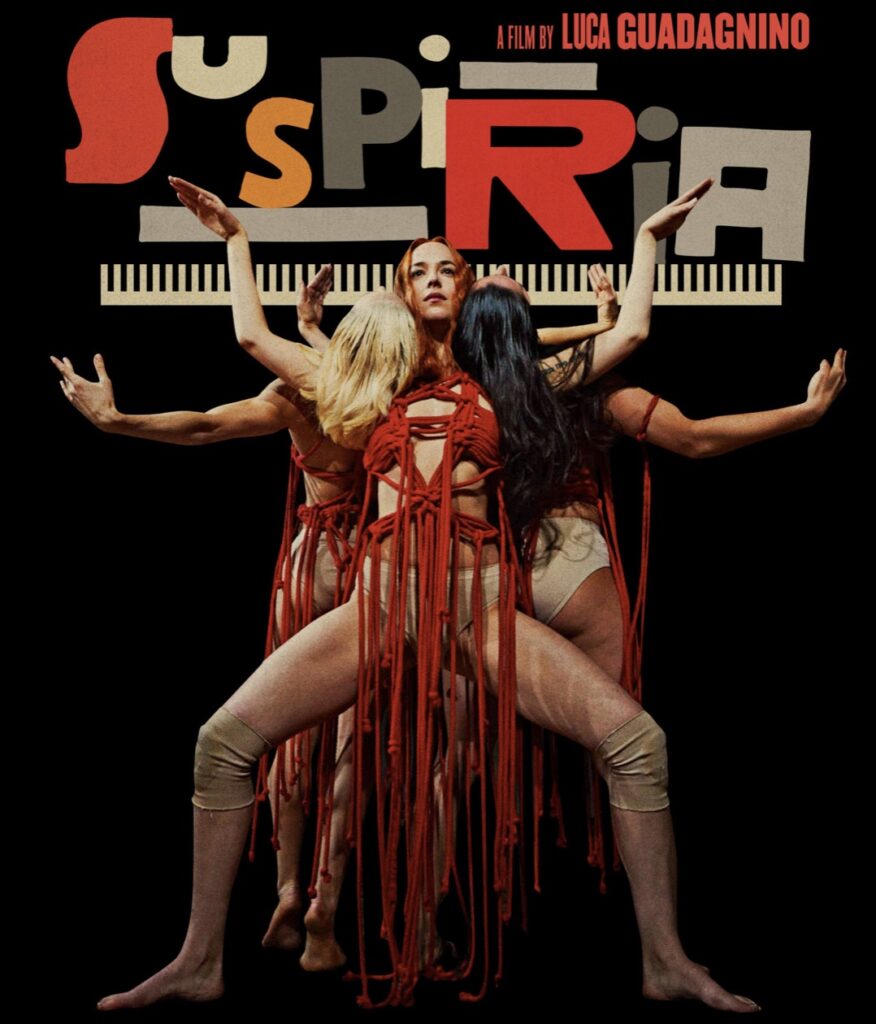 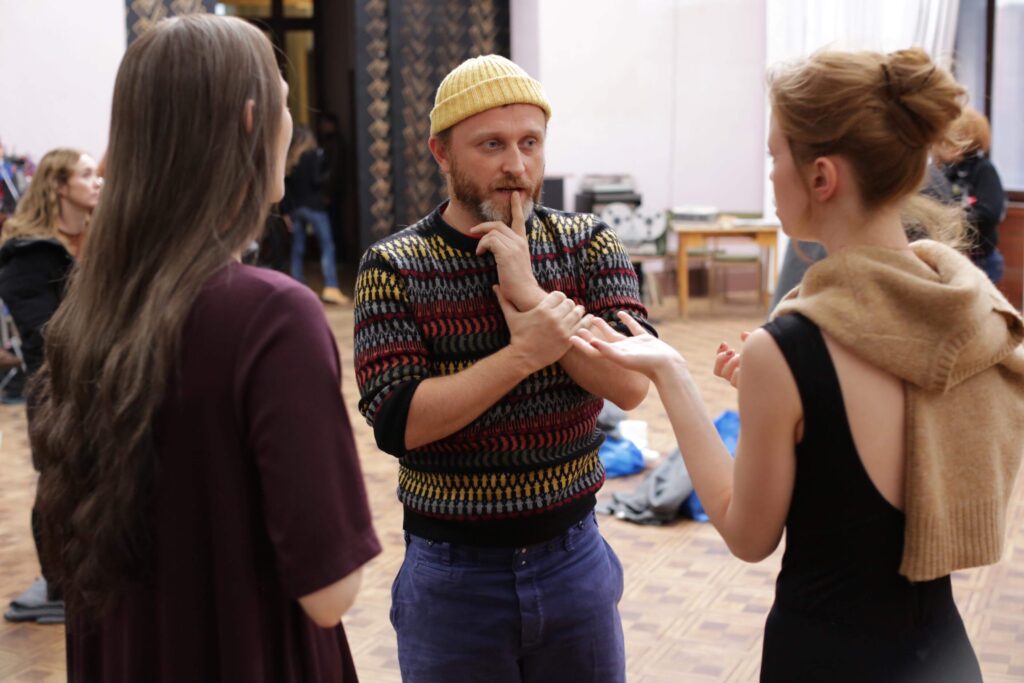 Finally a film that gets dance right

The Damien Jalet–choreographed dances stand out as the most gripping sections in the film’s dense two-and-a-half hours, in particular the fiendish group piece titled “Volk.” Johnson and her company, draped in red cords, cycle through razor-edged poses metaphorically — and then literally — coursing with brutality. For the sinister higher-ups, their charges’ perspiration serves as nourishment. At the Markos Dance Academy, movement is the essence of life.

The dance sequences are brilliant both in their significance within the storyline and razor-sharp delivery. Animalistic hunching, crawling and rolling across the floor, abrupt thrusts into open space and the fluid weaving around each other ’s bodies is quite a marvel to watch

An organic dance, visceral, sublimely choreographed by the Franco-Belgian Damien Jalet . A universal language which magnifies the realization, dictates the narrative and imposes itself as a character in its own right

Choreographed by Damien Jalet, dance proceed like orgasmic outbursts of uncooked power and violence to be marveled , watched and rewound ad Infinitum

The dancing in “Suspiria,” which is a major part of the movie, has so much snap and thrust and rhythm you might call it an art-conscious cousin of the pop choreography of Bob Fosse. Only there’s a crucial difference. Fosse’s bopping, hat-tipping, shoulder-flexing moves invited women to strut their erotic energy with forceful ownership, but the dancing was still filtered through a male gaze. Fosse seemed to be saying, “Empower yourselves — for me!” In “Suspiria,” the movement is even more jutting and explosive, but it erupts from the women’s souls. It’s primal writhing turned into modern dance; it’s sexual, but there’s nothing ingratiating or “sexy” about it. And that’s why it’s dangerous.

Instead of jumping with surprise, you shiver, wince, frown, and bear the brunt — never more so than when the action hits the dance floor, and when the editing snaps in time with the bodies in motion.

Jalet’s choreography is all savage ecstasy, runic repetition and primitive abandon, marking the sacrificial moment of death and rebirth

Suspiria is masterly choreographed…Good dance is as rare in cinema than good art..The dancing in this film belongs to a serie of classics including “The red shoes” and “All that Jazz”.