Created in Mexico City, with the 20 dancers of the national dance company Ceprodac, Omphalos explores forgotten old European and indigenous myths about the origins of Mexico, working these up into a reflection on being human and the situatedness of human life in the cosmos… With music by Marihiko Hara and Ryuichi Sakamoto.

It is said that one day Zeus sent two eagles, to either end of the world. The place where they met would define its center, The Omphalos; “The Navel of the World.” Materialized by a rock, which is commonly represented as being protected by a snake. The eagle and the serpent are also the symbols of Mexico City, whose etymology means “In the Navel of the Moon.” Starting from this mythological axis between Mexico and Europe, “Omphalos” digs through abandoned stories, created by observing the cosmos, reacting to an indigenous imagery on the ruins of a contemporary symbol of science and communication.
Using mythological and scientific cosmology, conscious and unconscious knowledge, the work results in a physical reflection on the perception of time, which is elastic, multiplicitous. The dancers, the lords of time, become weavers: undulating between cycles and patterns that blur the lines between their own experiences, and the forces that move them. They embody its various textures, manifested through accelerations, decelerations and unpredictable dizzying spirals. With their visceral movements, they will open a door between human time and parallel existences. Expressing a personal cosmogony through the gravitational laws of physics, geometry and relativity.
Attracted by the four cardinal points: a pendulum that breathes, capturing contemporary echoes through distorted frequencies, radio transmissions, transmitters, and the receivers that physically translate that which cannot be seen. Omphalos moves between an almost forgotten past and an increasingly uncertain future. The dancers are tethered to the vertigo of time, dancing before the portal closes again. 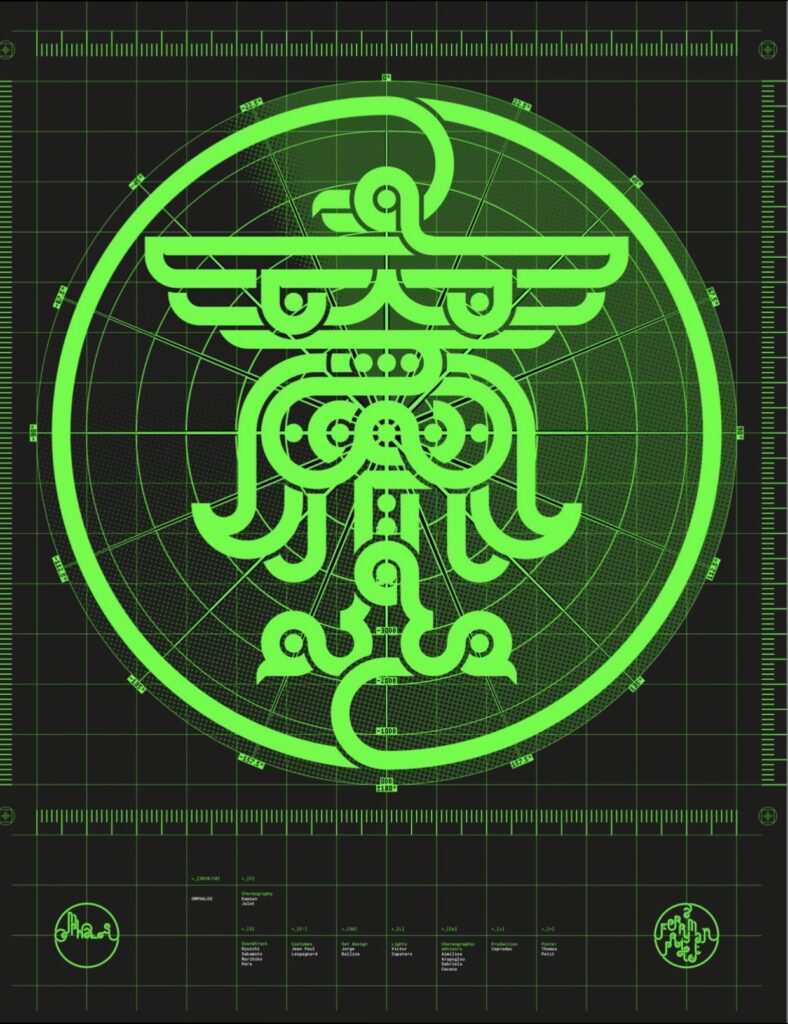 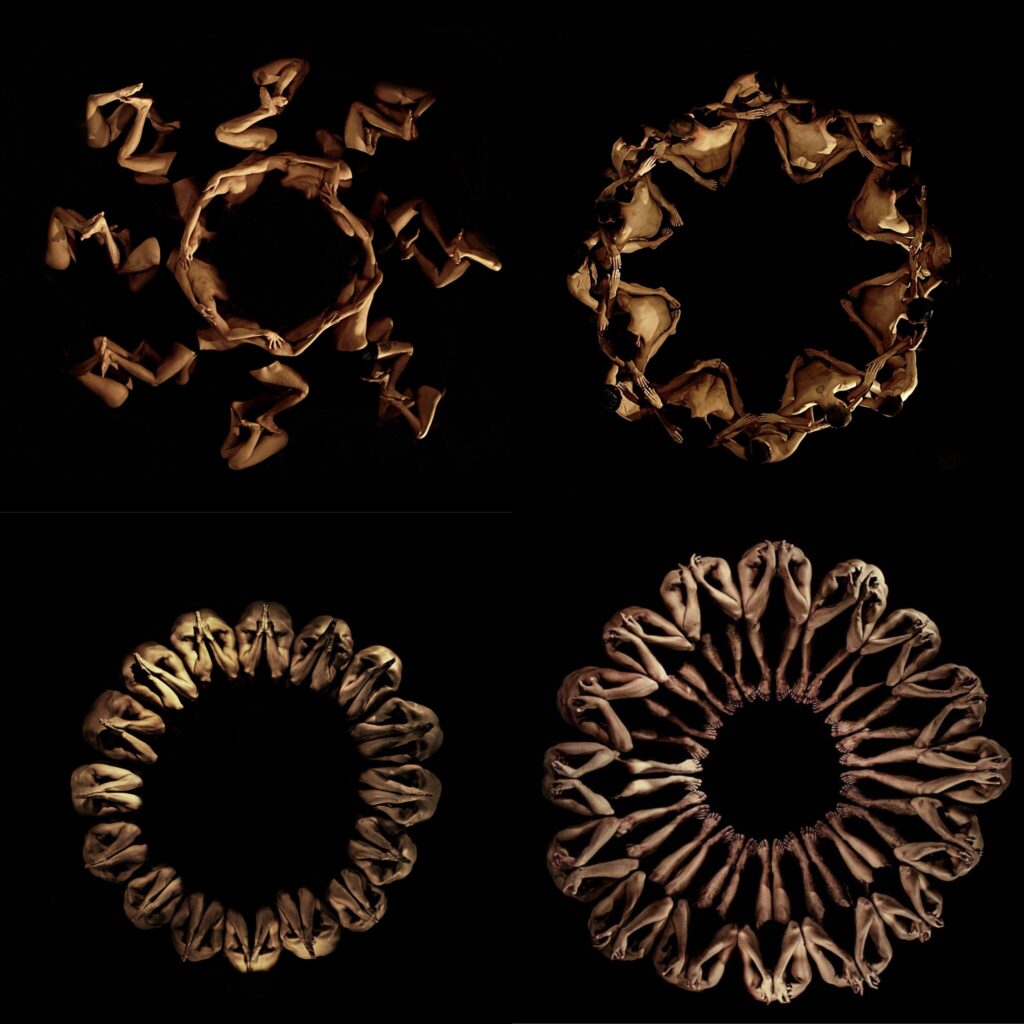 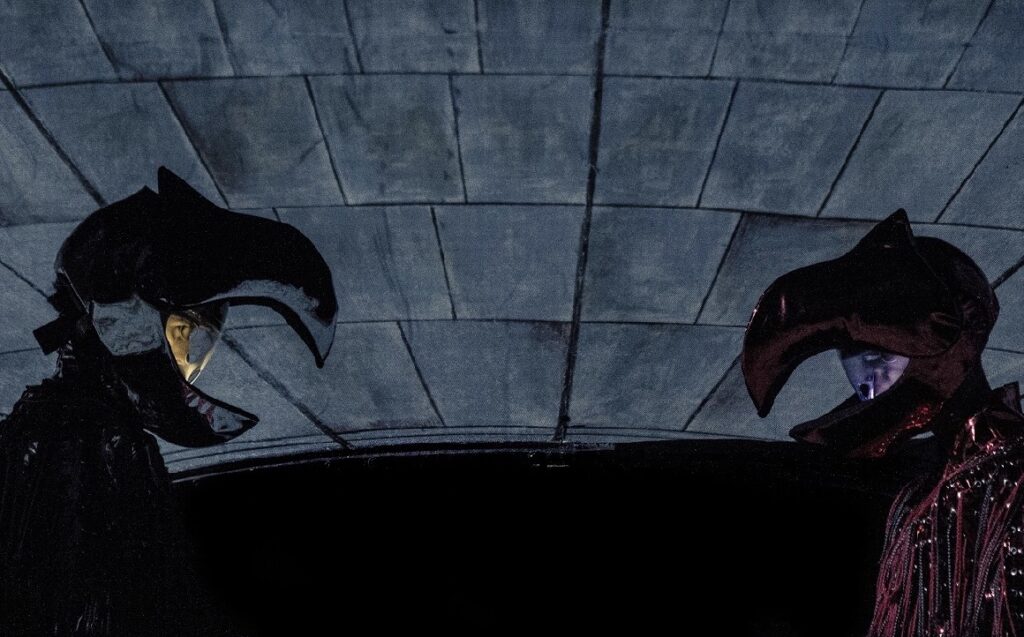 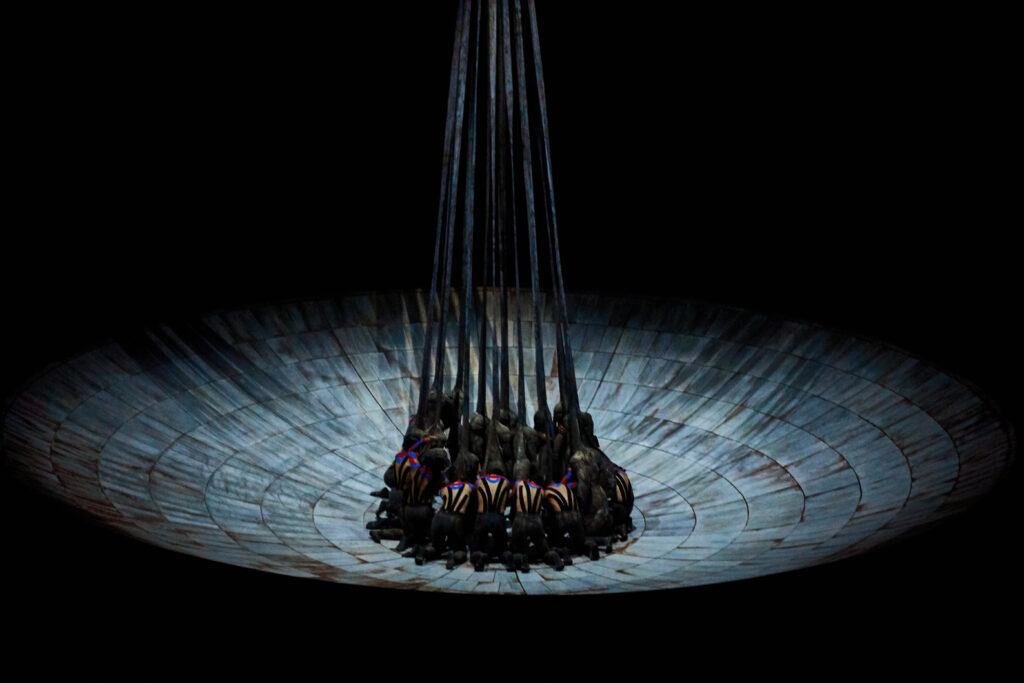 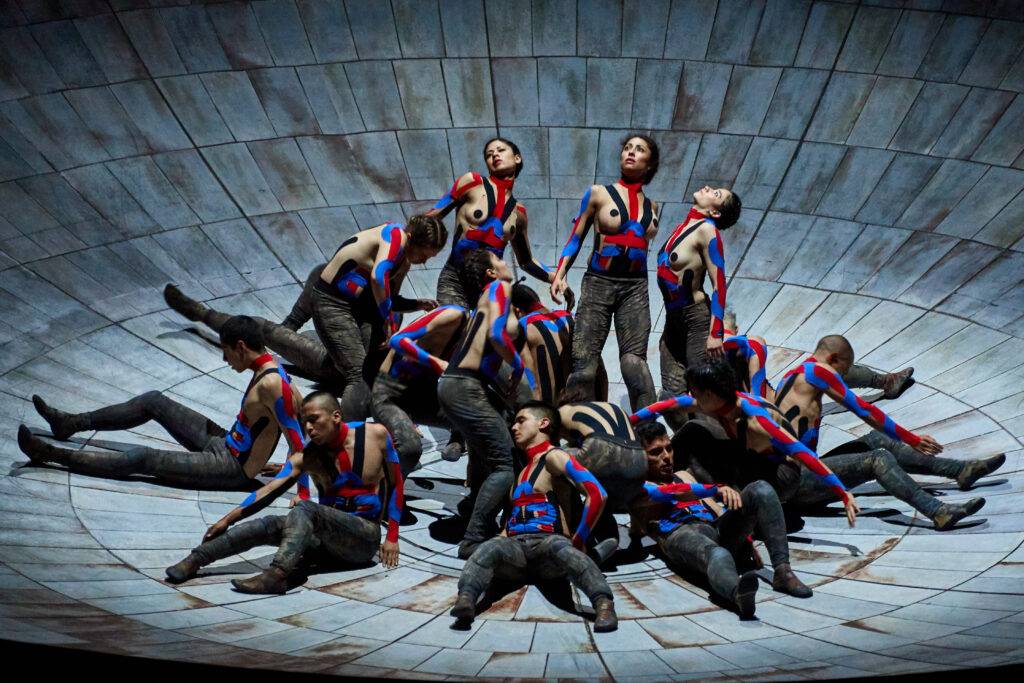 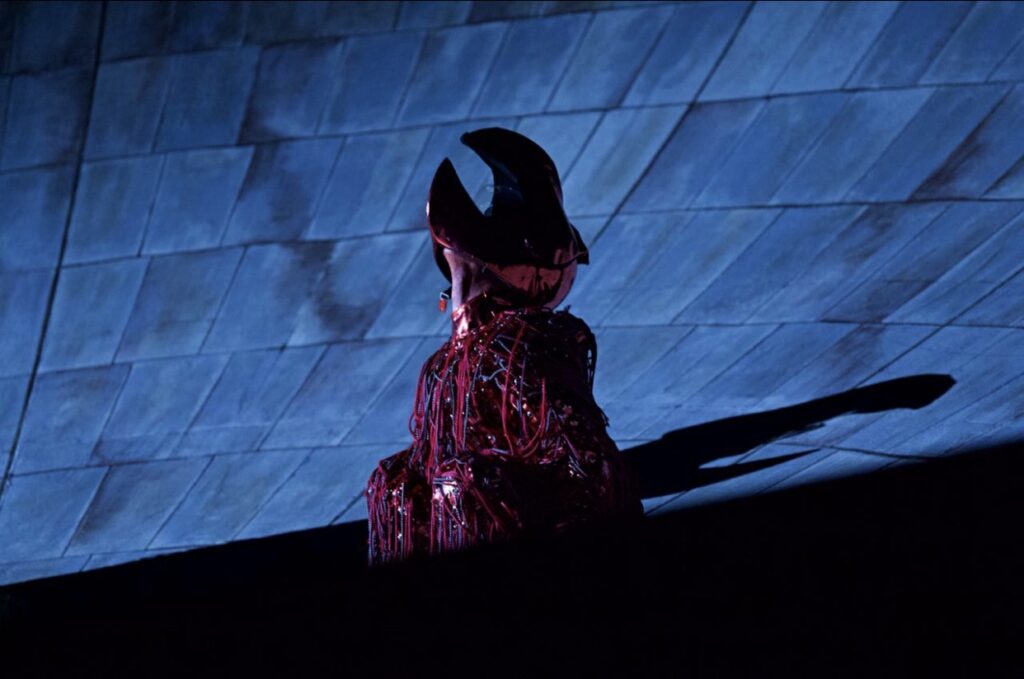 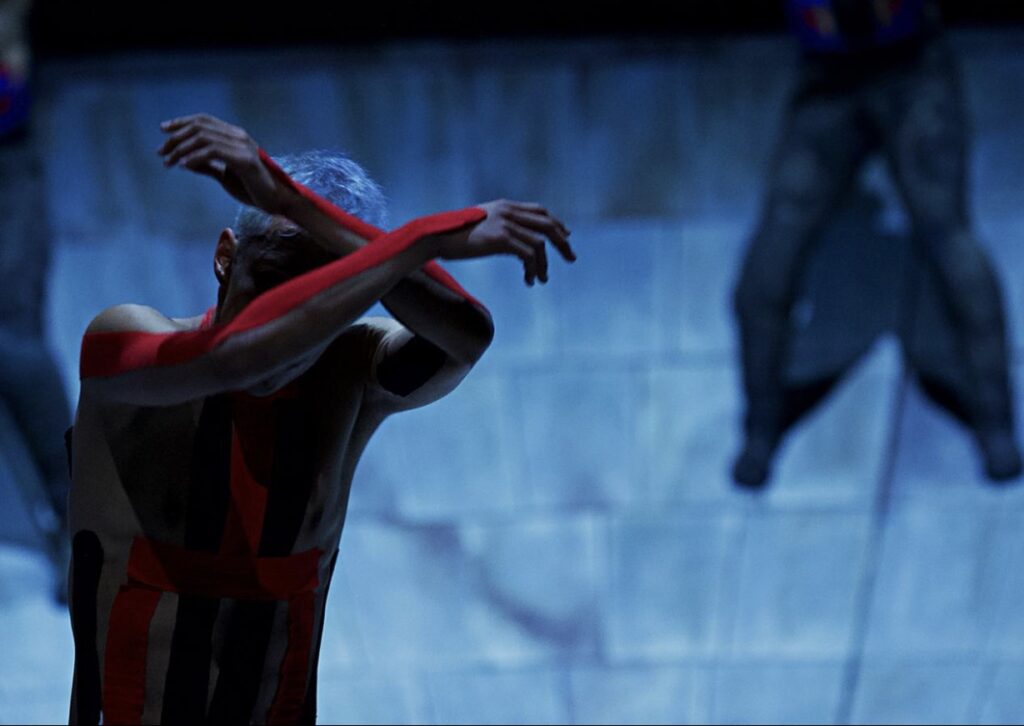 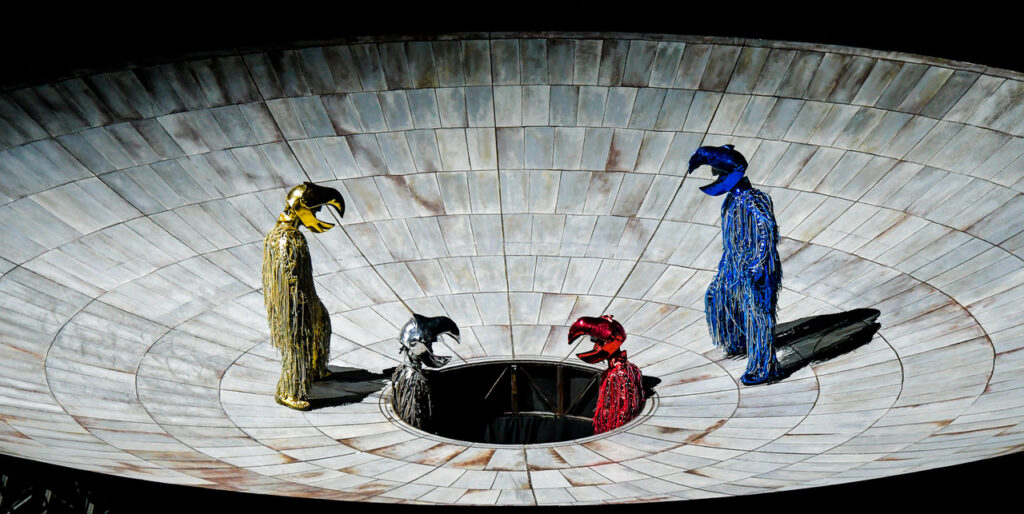 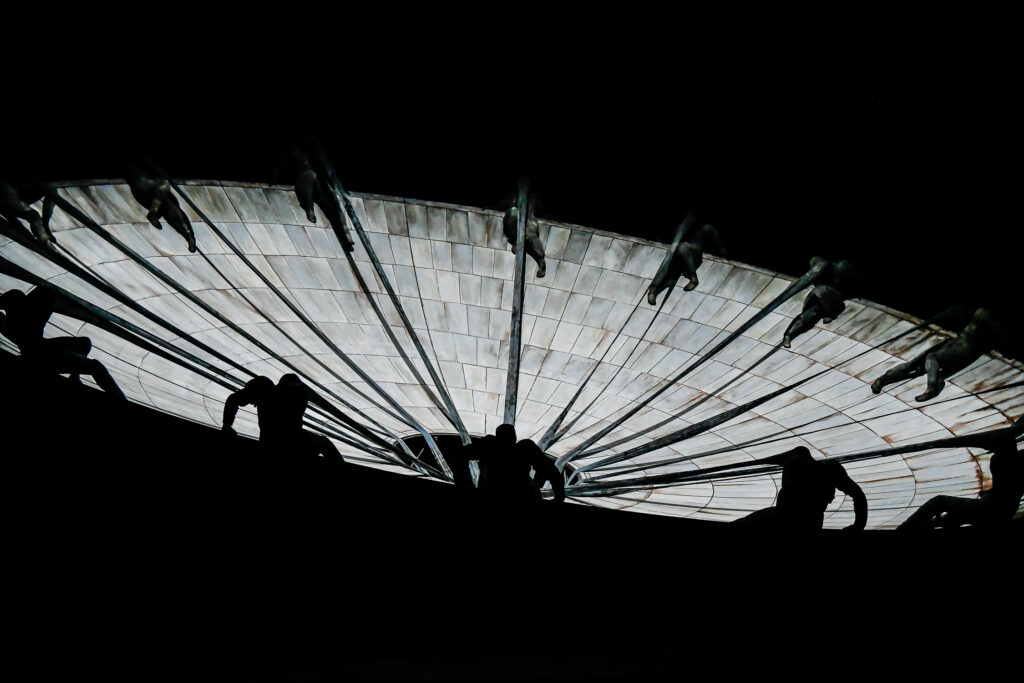 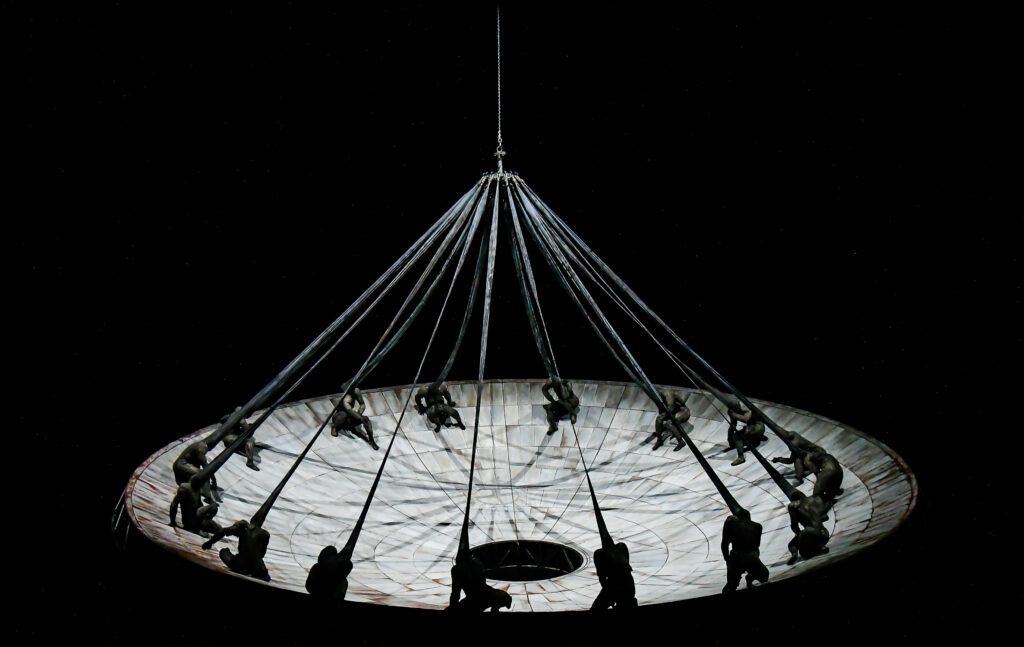 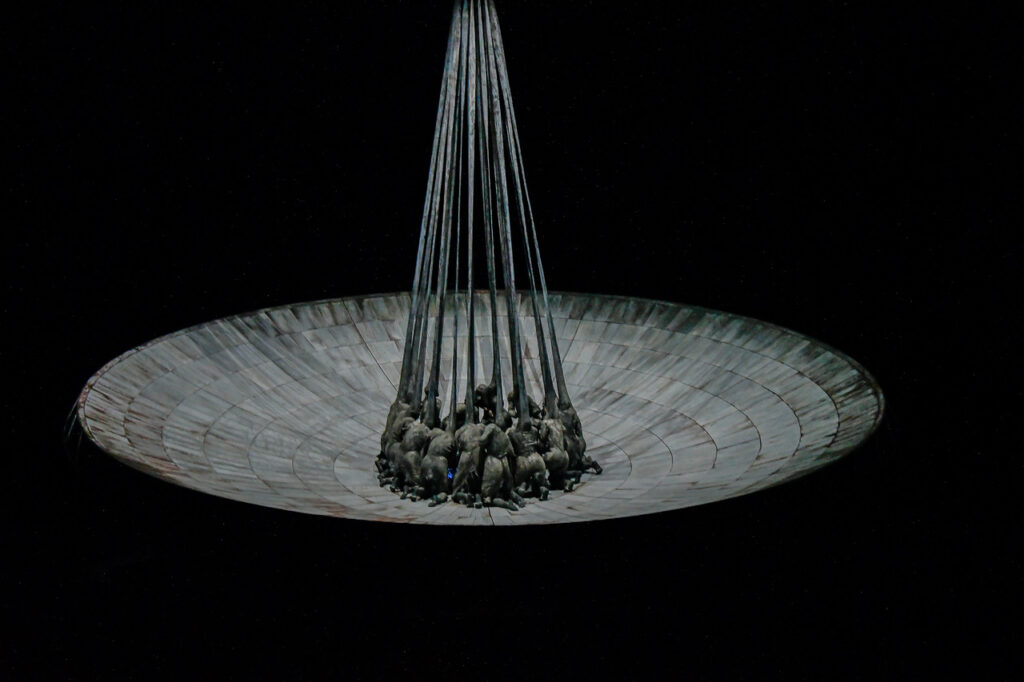 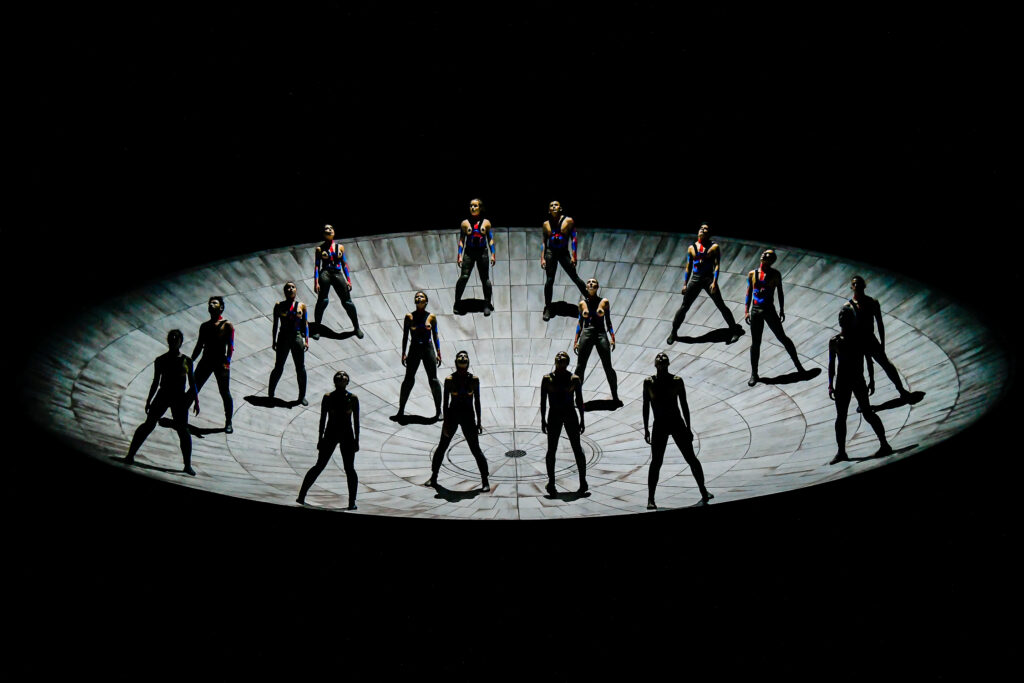 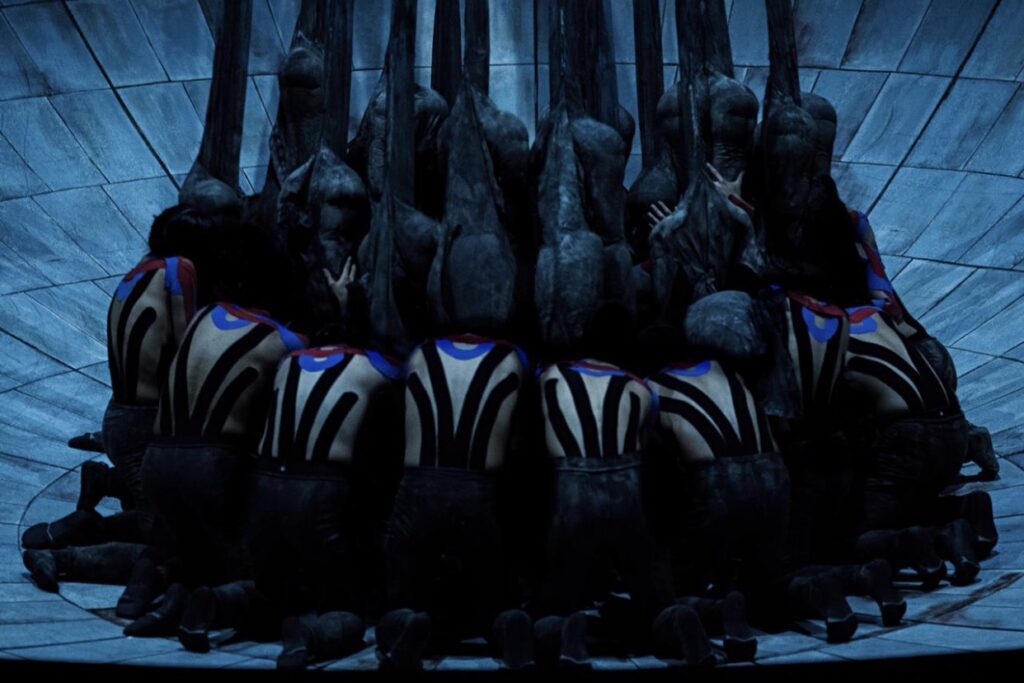 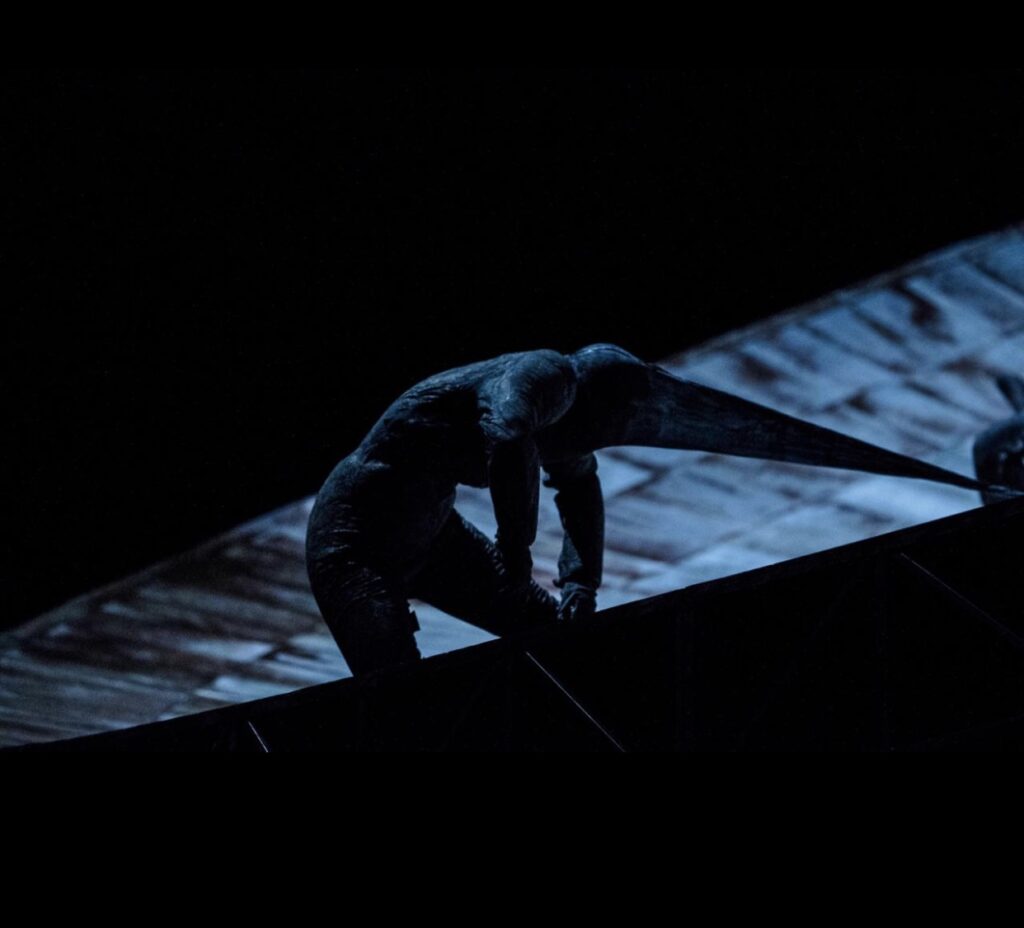 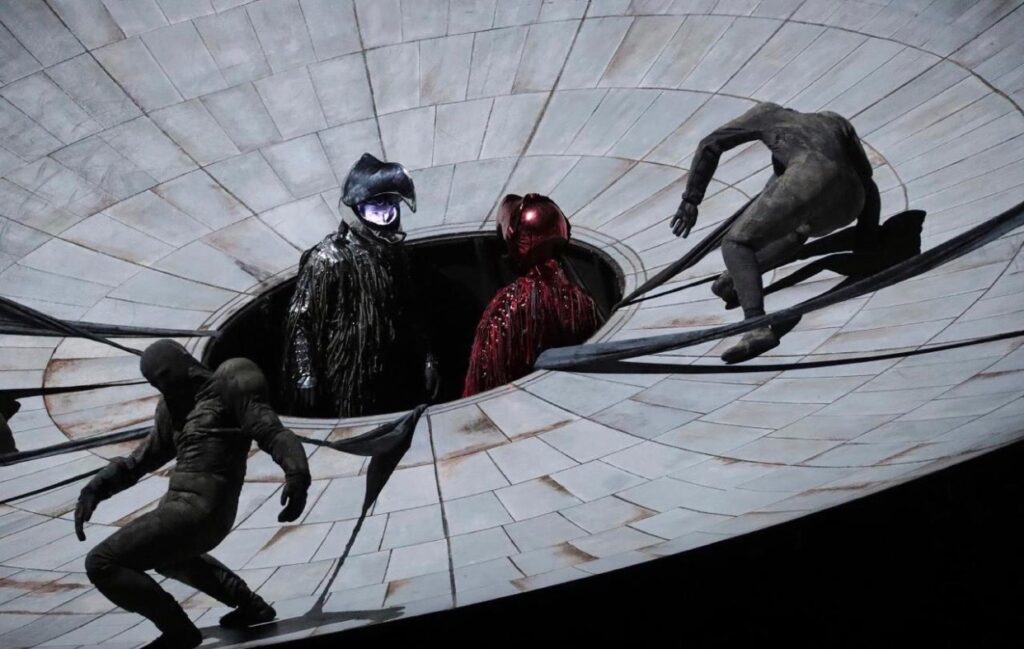 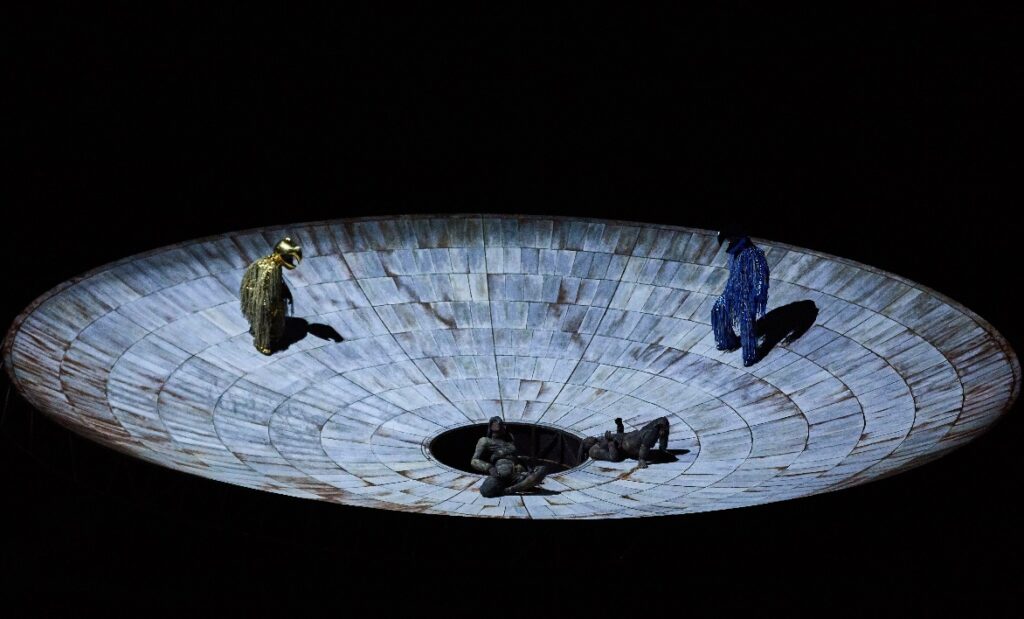 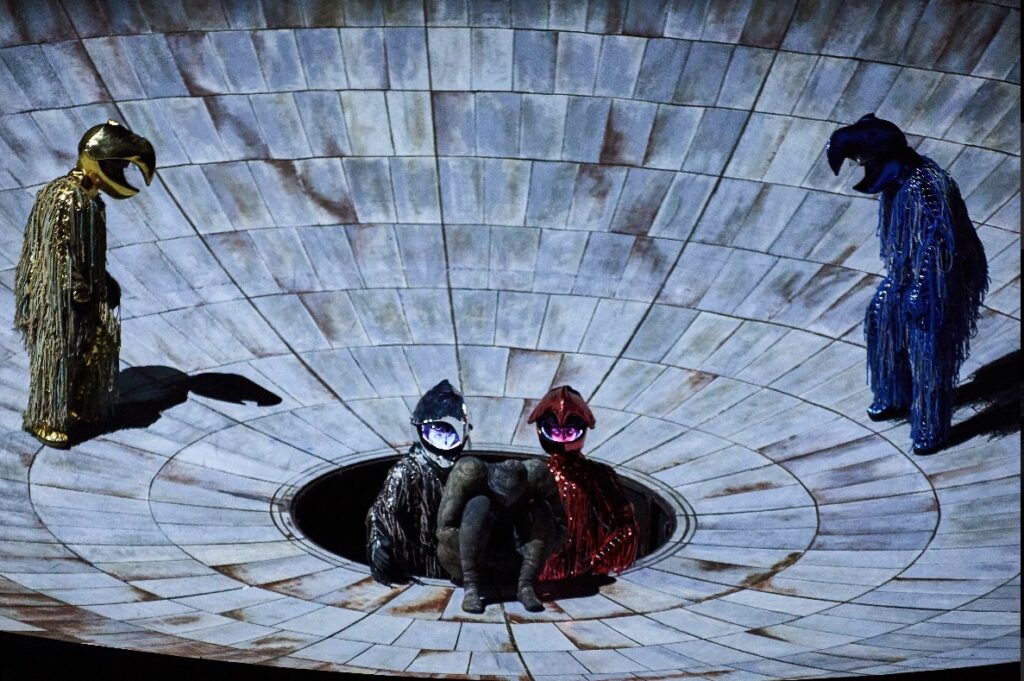 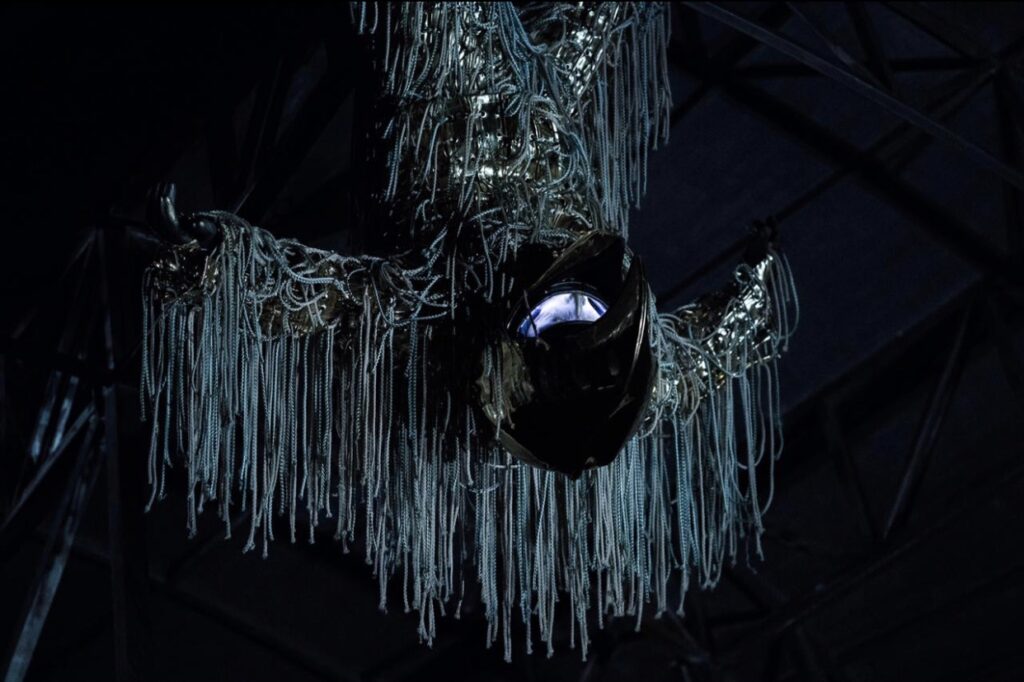 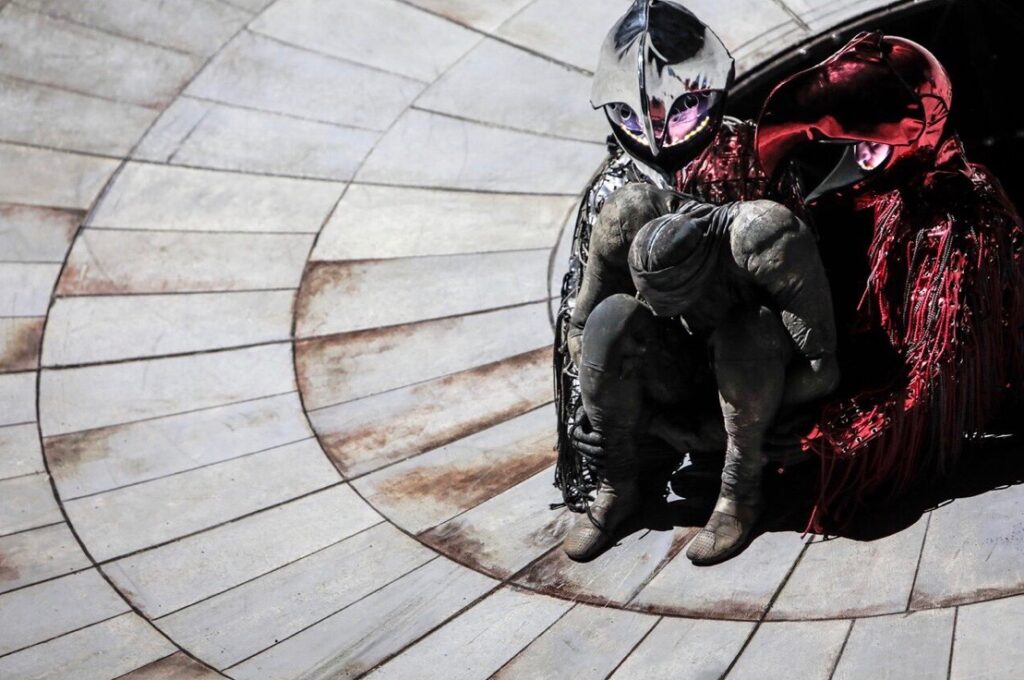 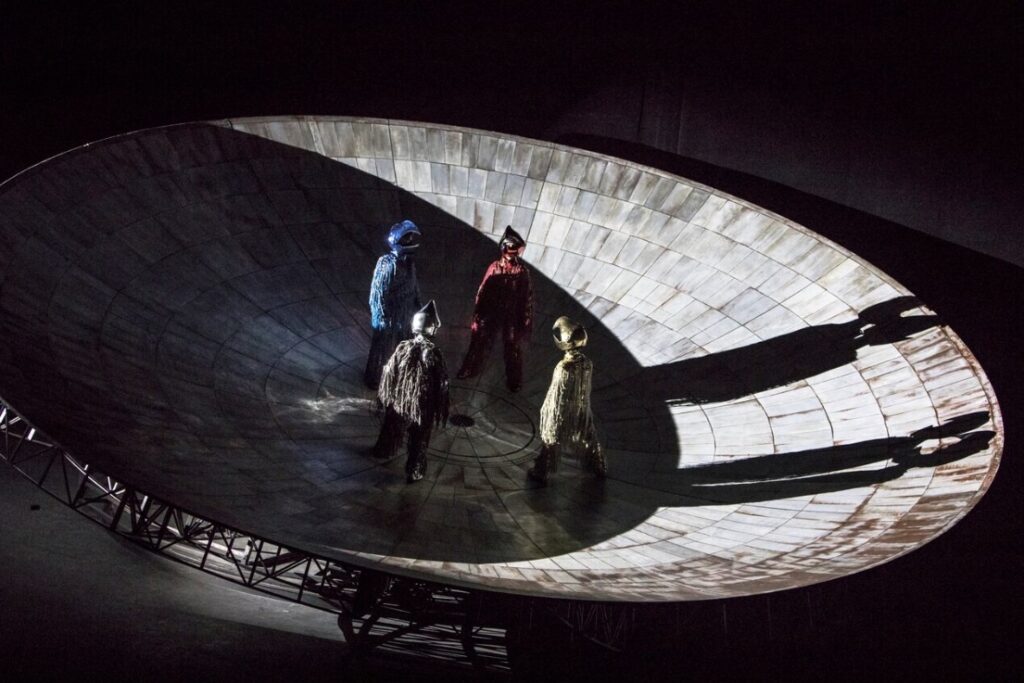 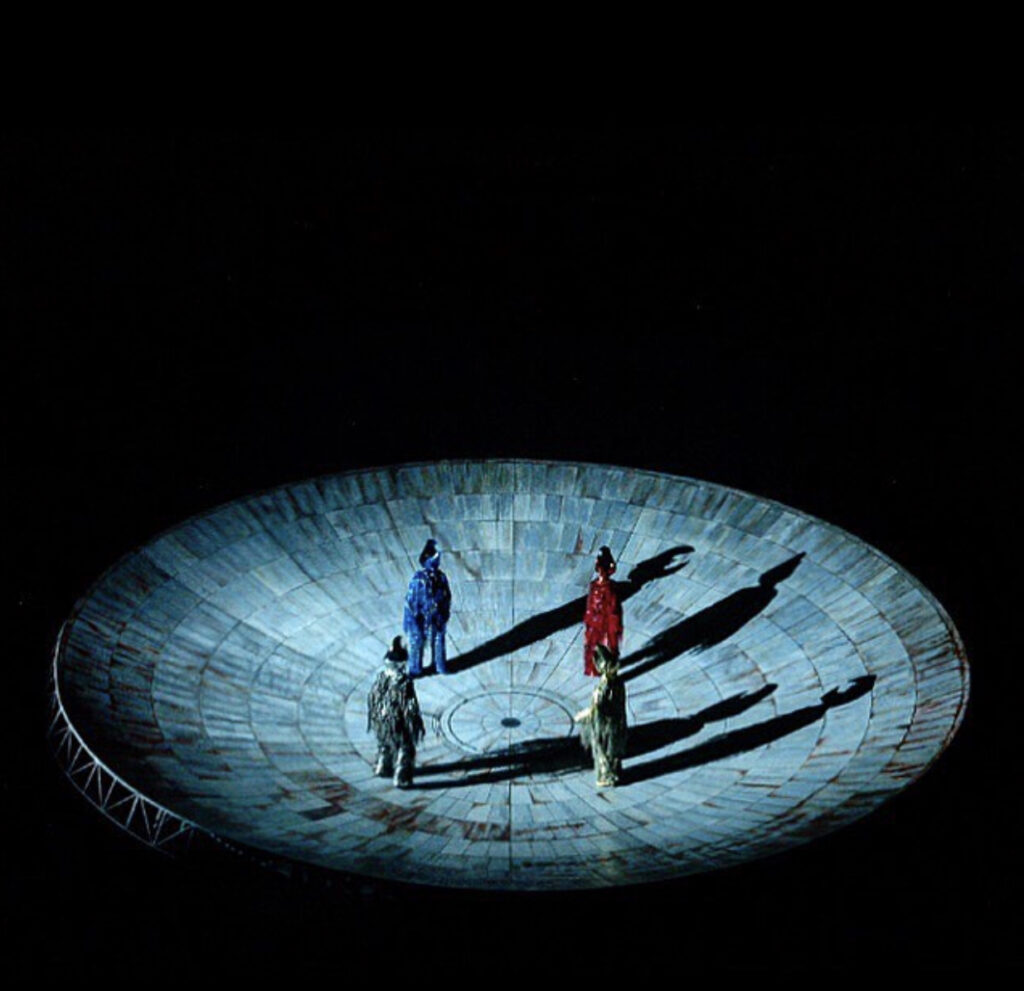 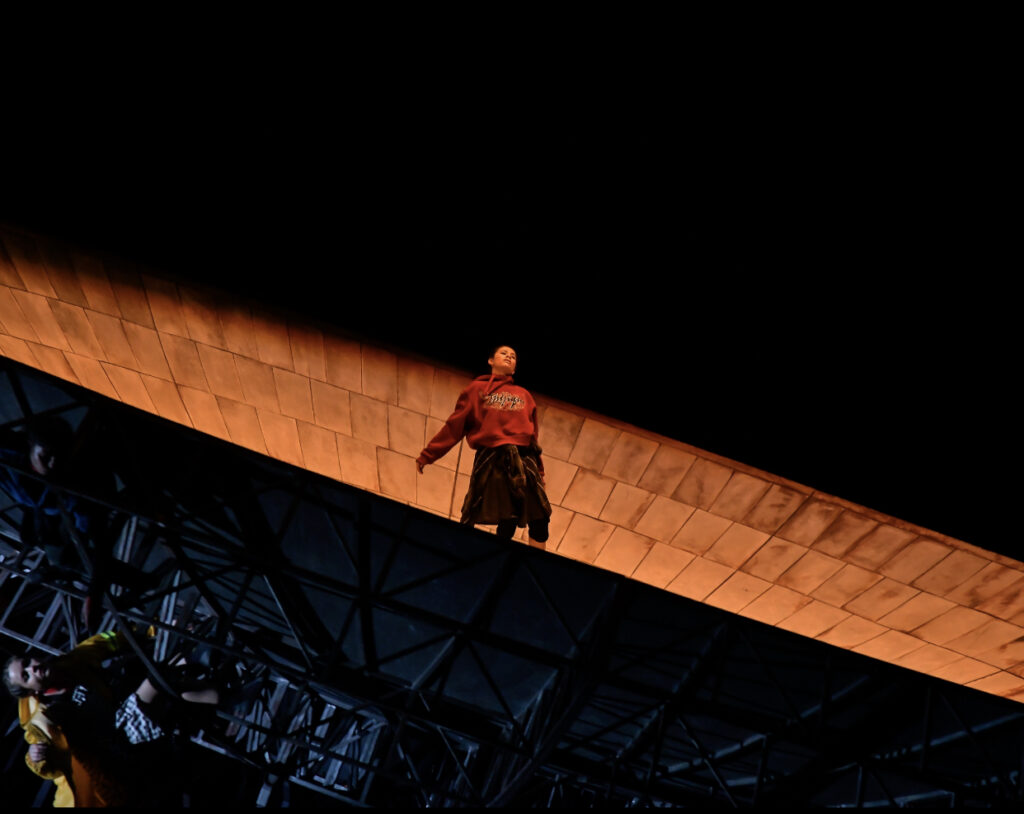 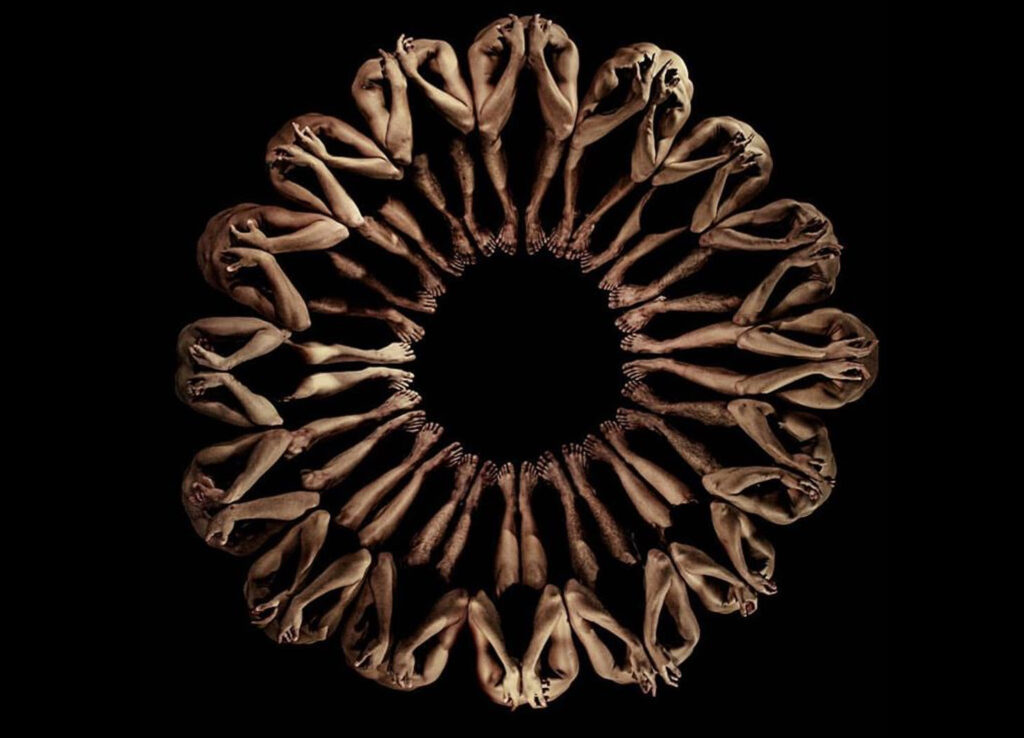 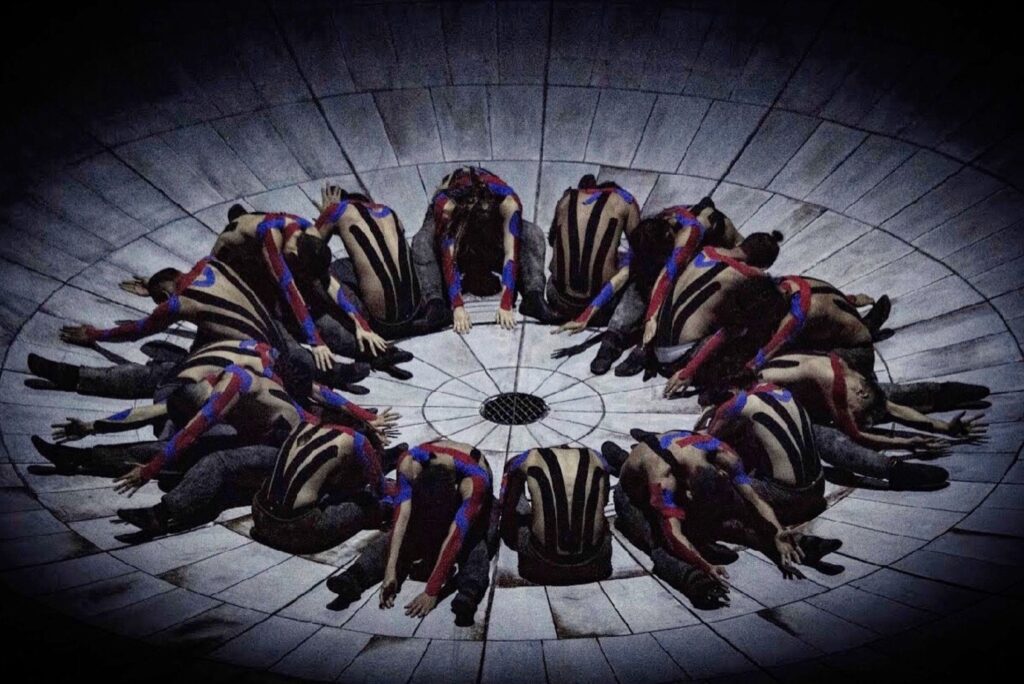 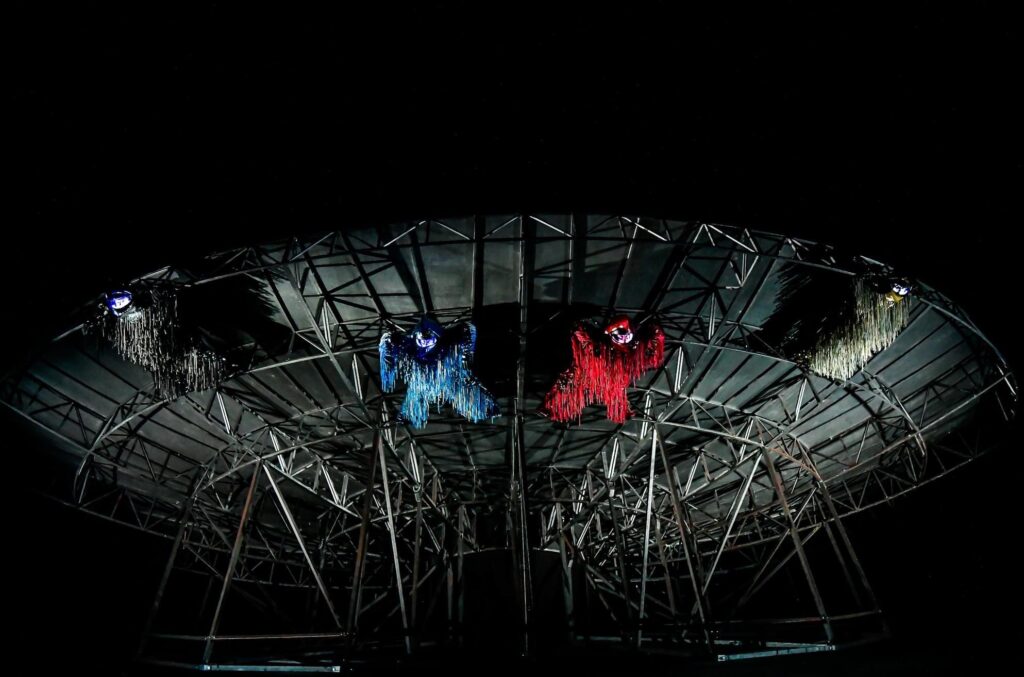 Damien Jalet succeeds with “Omphalos” not only an extraordinary view of becoming and passing away, but he takes with his cyclic and spiral dances, also influence on the perception of time. “Omphalos” becomes an incomparable bridge between past and future.

Omphalos is a fascinating choreographic journey euphorically celebrated by premiere’s audience. In places, it unfolds a magic comparable to Stanley Kubrick’s film classic “2001 – A Space Odyssey”, mainly because the choreography poses crucial questions and opens up a multitude of spaces of association. Damien Jalet works with strong collaborators, great precision, and a movement repertoire of his own promising further major solo works.

The Belgian is the shooting star of a new generation that transforms dance into intoxicating images. Kampnagel presented the European premiere of the work, which was created with dancers of the Mexican ensemble “Ceprodac”. Accompanied by cosmic sounds, dance invades spheres that no one has ever seen before.

With “Omphalos” Damien Jalet has succeeded in creating a magnificent, archaic allegory of the eternal cycle of human condition , of becoming, of being and of passing away. Electronic music, together with the dance, develops a magical pull that almost puts you in a trance as you watch it. The audience rightly celebrated everyone involved with an ovation.

As in his work with the artist Jim Hodges, the clever, powerful, mythically charged physicality is mysteriously beautiful and frighteningly real on a set emphasizing the instability and strange metaphysical leaning of human existence.