For choreographers, ballet music has never ceased to be a source of inexhaustible inspiration offering a plethora of new readings and personal interpretations. For their first production for the Opera Ballet, Sidi Larbi Cherkaoui, Damien Jalet and visual and performance artist Marina Abramović, return to a legendary work of the 20th century, Maurice Ravel’s Boléro.

In the pit, the orchestra of the Paris National Opera, led by the Estonian conductor Vello Pähn, kicked things off, launching into the first drum rolls of Maurice Ravel’s “Boléro” (1928), as onstage a tribal army advanced threateningly, its feet thumping to the beat of the music.

The military, shadowy, and industrial aspects of “Boléro” have been played up by Abramovic and the ballet’s co-creators, Belgian choreographers Sibi Larbi Cherkaoui and Damien Jalet. The performance artist, who had never worked on a ballet before, also designed the set, creating a spectacular design based on a very simple idea: a tilted mirror replaces the back of the stage, creating doubles of the dancers. The temporal and spatial points of reference that are so important in dance became confused. The energy of the bodies was multiplied. And it was easy to recognize, in the dark, mechanical parade of the first seconds, the mark of the Belgrade-born artist. This opening also recalled Ravel’s fascination with the regular rhythm of the machines at his brother’s factory, which he visited several times while composing “Boléro.”

Despite its martial opening, this “Boléro” was incredibly fluid. Black soon gave way to the white of transparent veils. The pounding of the drums yielded to the refrains of the flute. The dancers, most of whom were stars of the Paris Opera Ballet, spun around like whirling dervishes caught in a trance — but a gentle trance. The bodies were anchored to the ground, supple and sensual, but at the same time almost ethereal, constantly submitted to an upward force.

The dancing was liquid and wave-like. It was all about turning. The extended arms, the shoulders, and the heads all drew the dancers into a continuous circular movement. This production focuses on the centrifugal force of “Boléro.” When the ballet was first staged in 1928, the dancer Ida Rubinstein, standing on a cabaret table, also spun without stopping. But her performance was as furious and demoniacal as this “Boléro” is divine.

The dominant impression was one of exquisite gentleness, floating magic, and hypnotic power, as when solitary spinning dancers formed circles of two or three, like shining constellations on a black background. The couples and trios almost seemed to fly away, like those painted by Chagall on the opera house’s ceiling. Although vital, this version is also calm, which may irritate some spectators. But it has the added merit of playing the androgyny card (thanks to clever costuming), which recalls Maurice Béjart’s “Boléro” from 1960, in which roles were randomly danced by men and women. This new production has also gotten rid of the hierarchies of the Opera ballet by preferring collective performance to soloists.

Boléro premiered in may 2013 in Palais Garnier in Paris.

Creation for the Paris Opera Ballet. 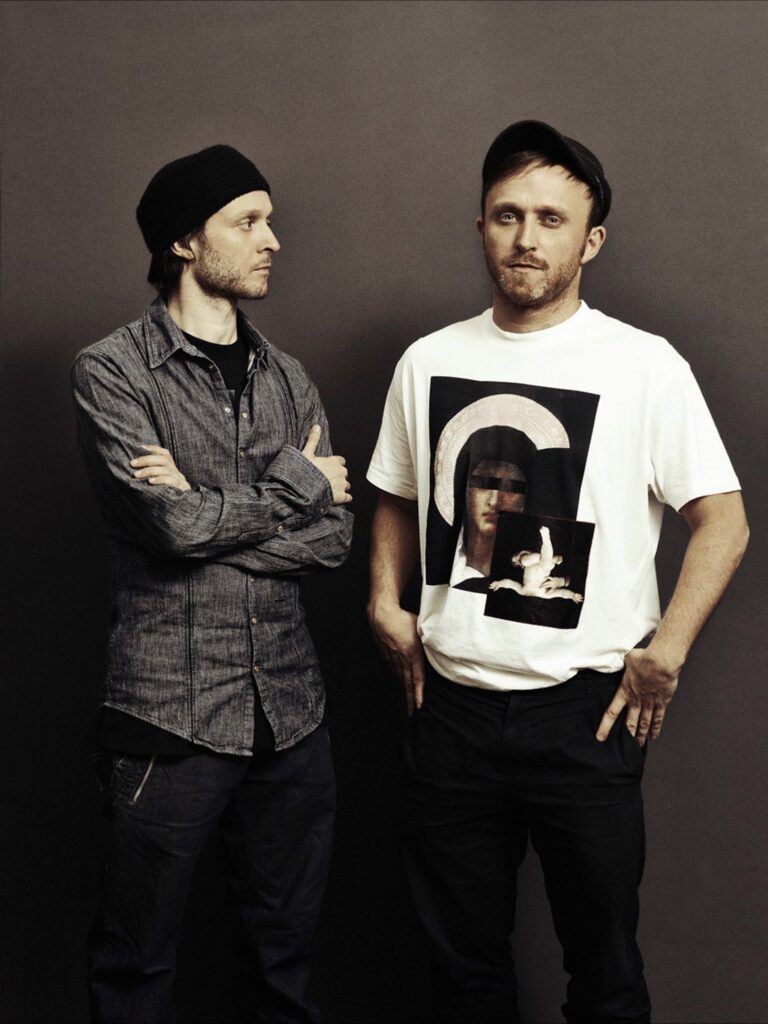 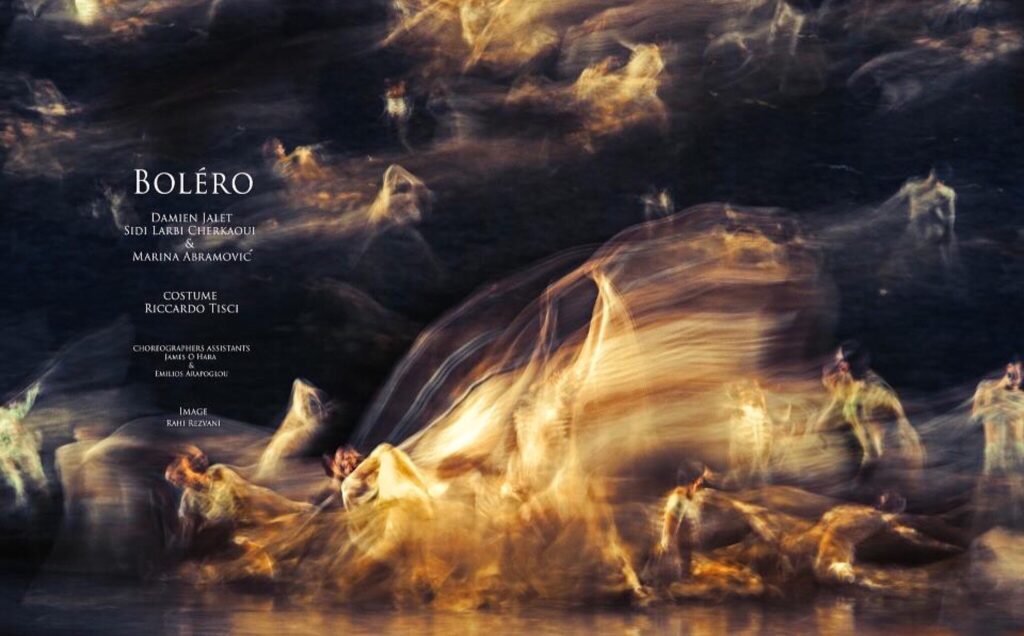 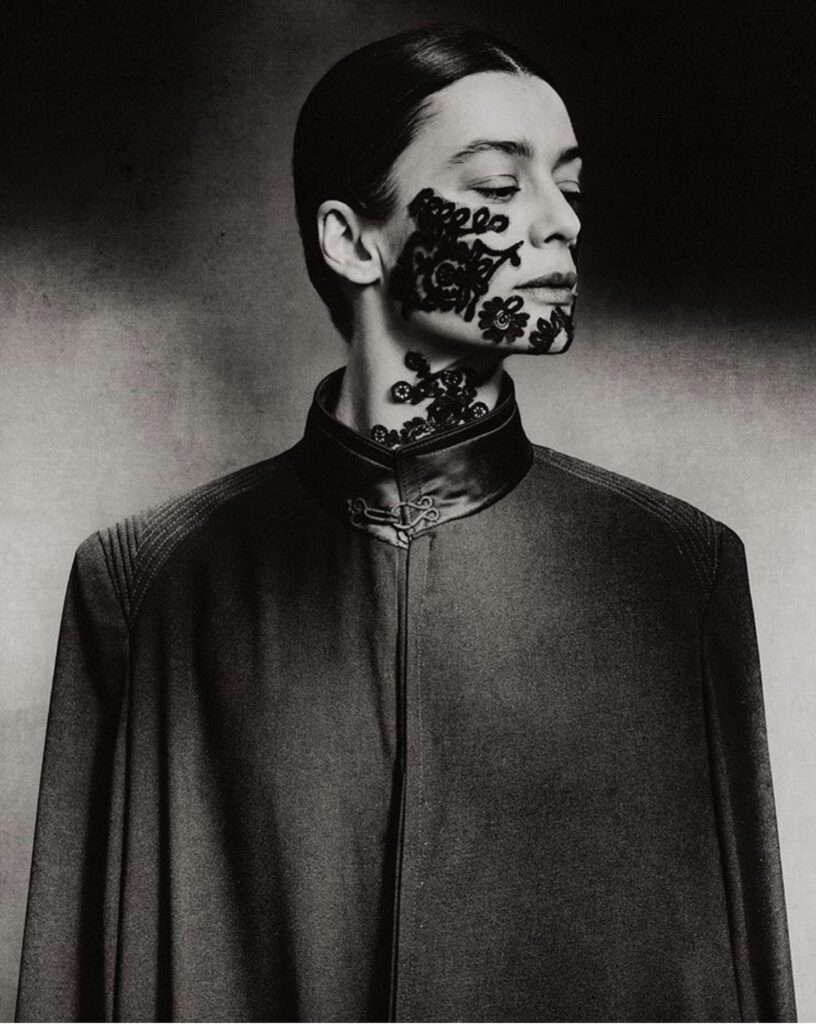 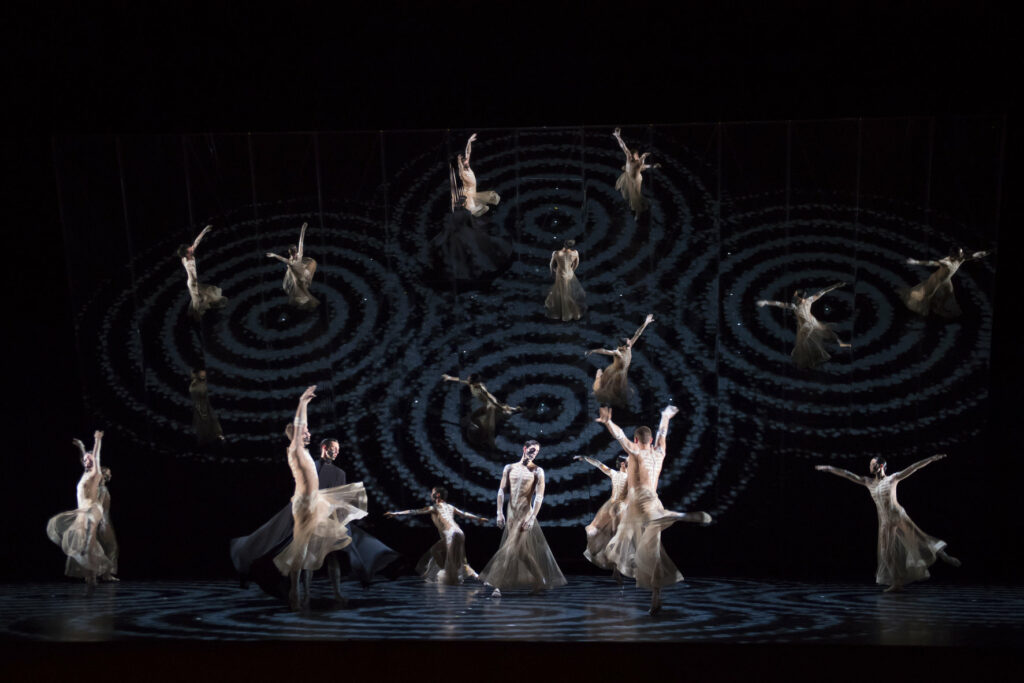 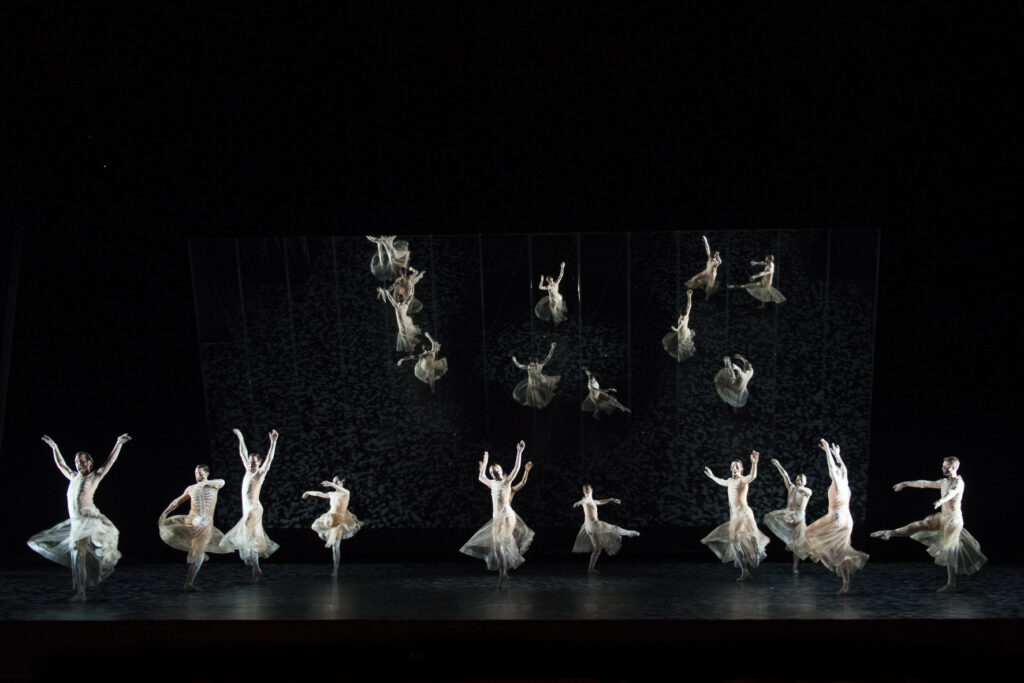 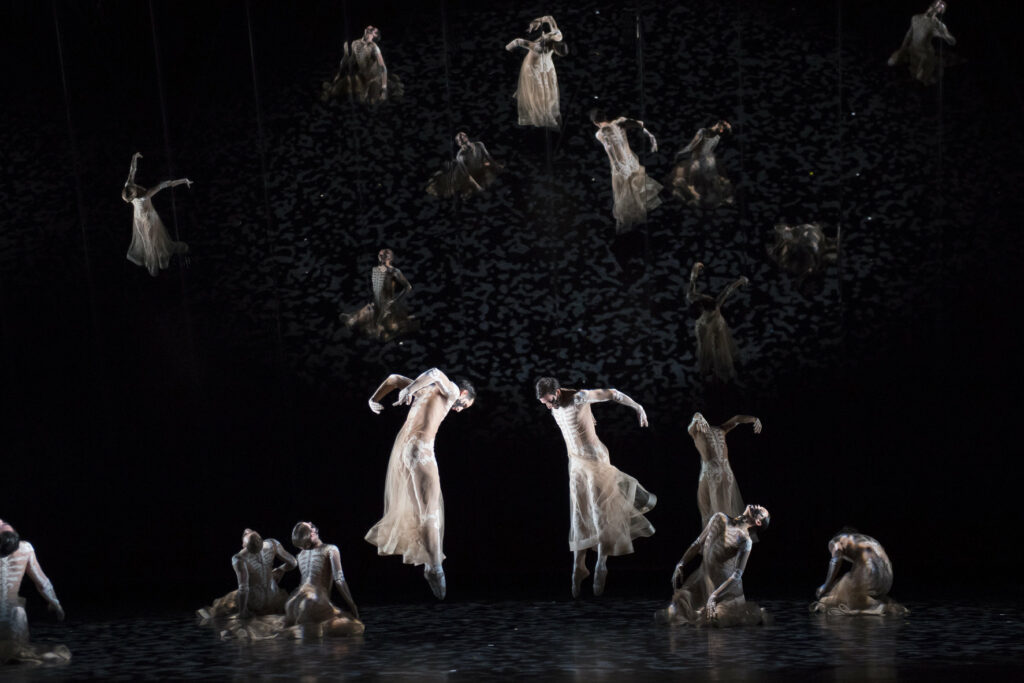 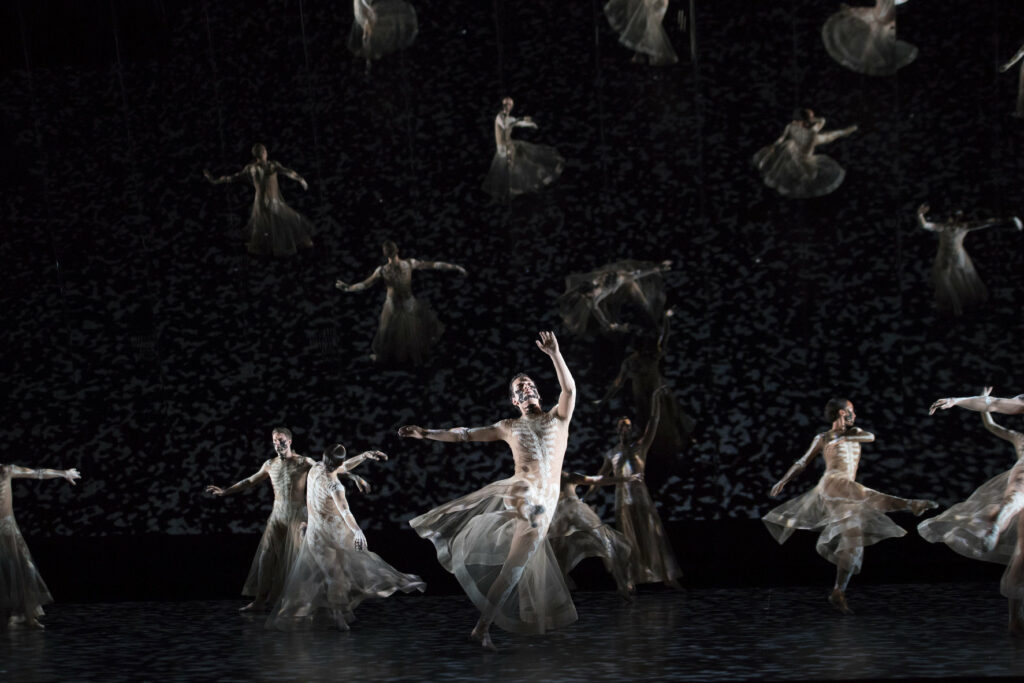 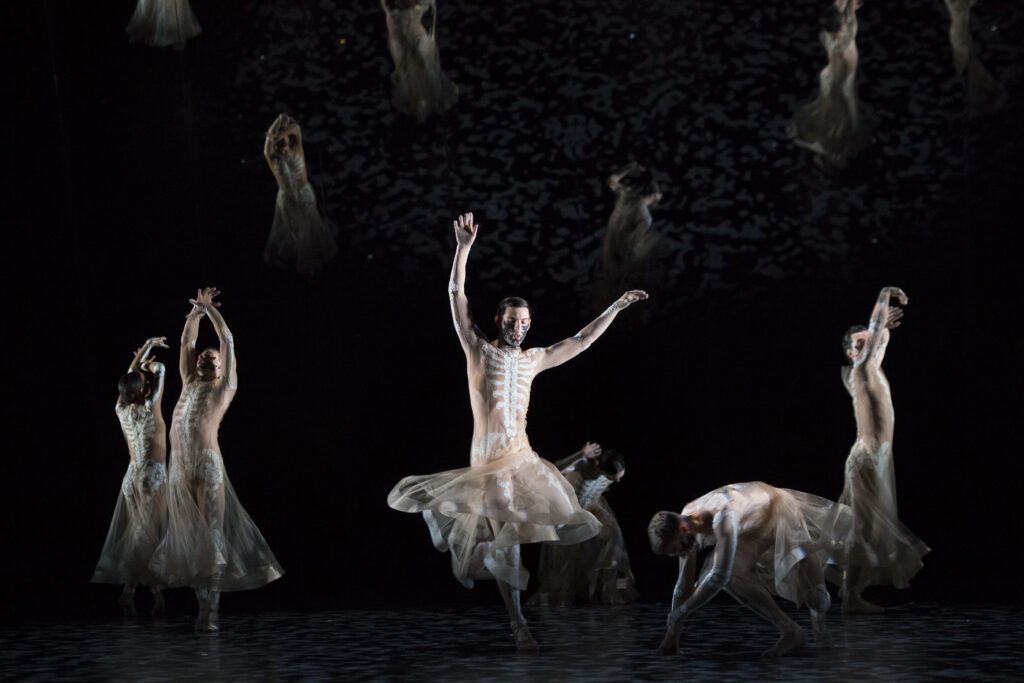 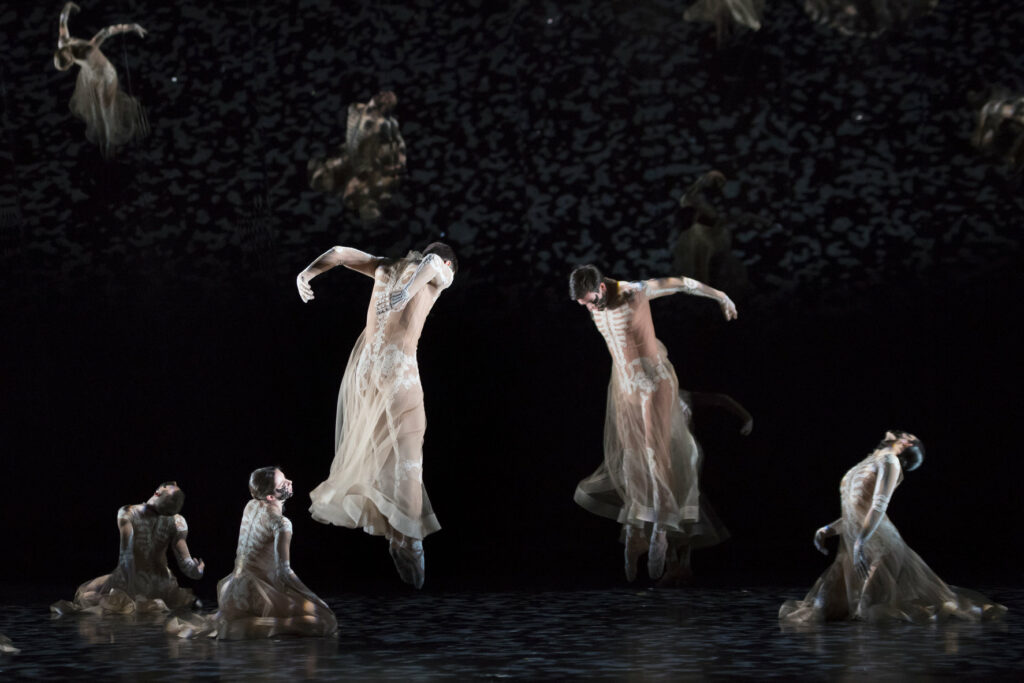 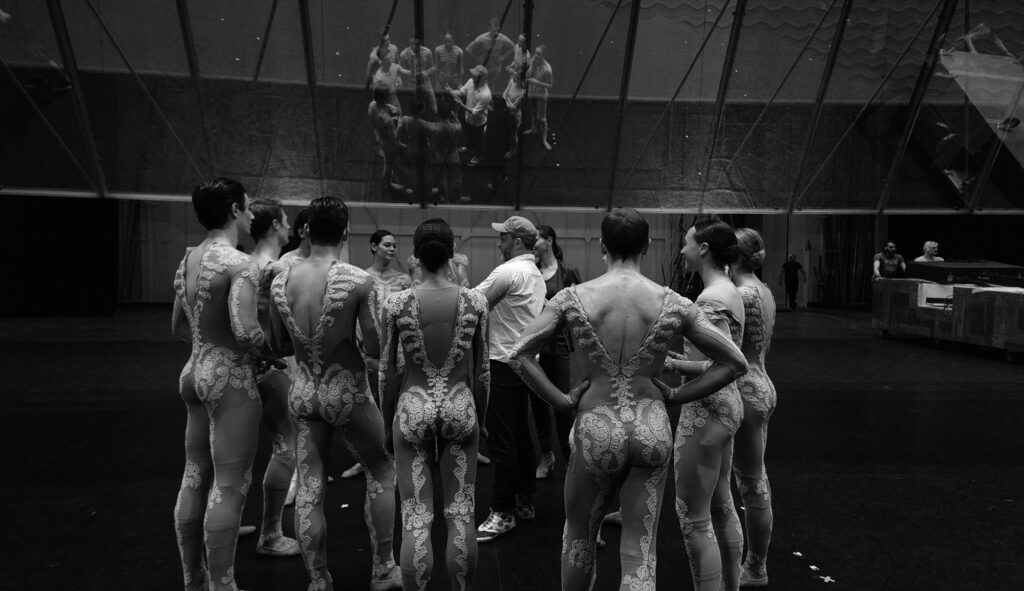 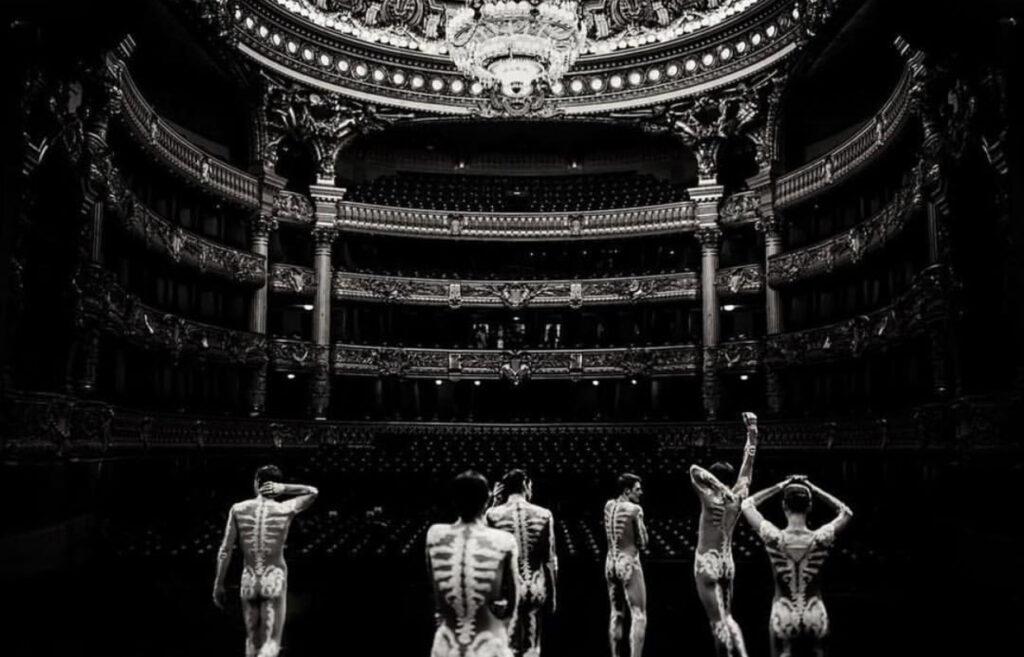 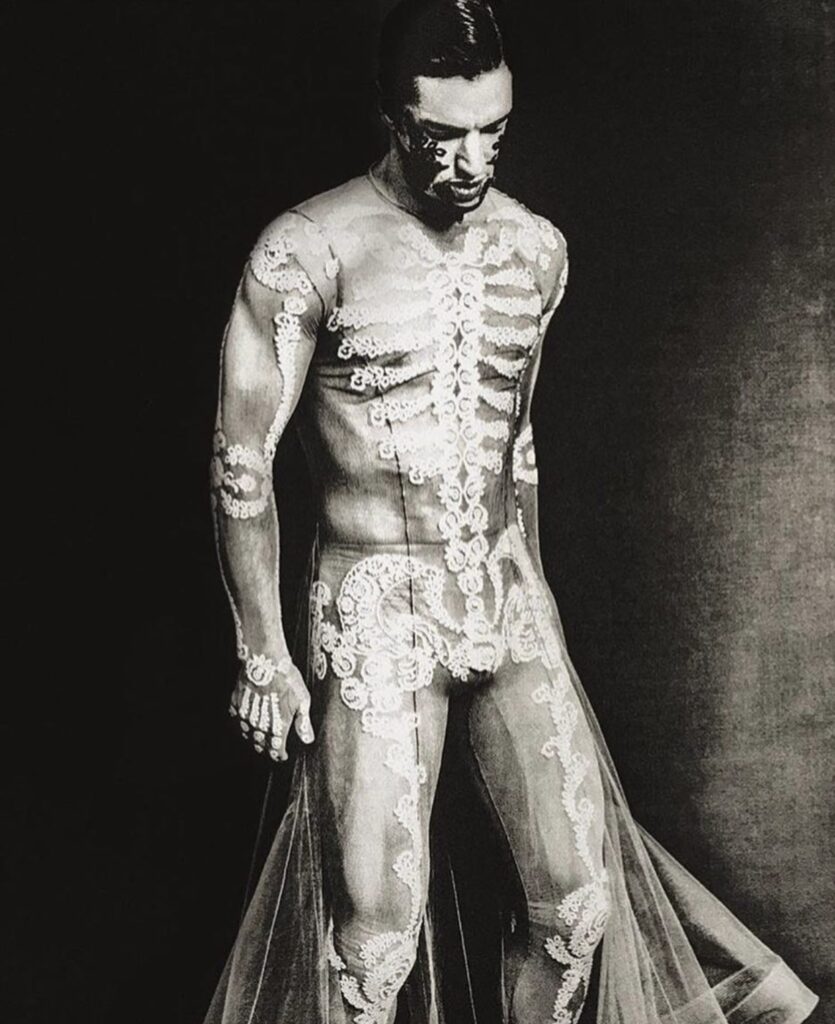 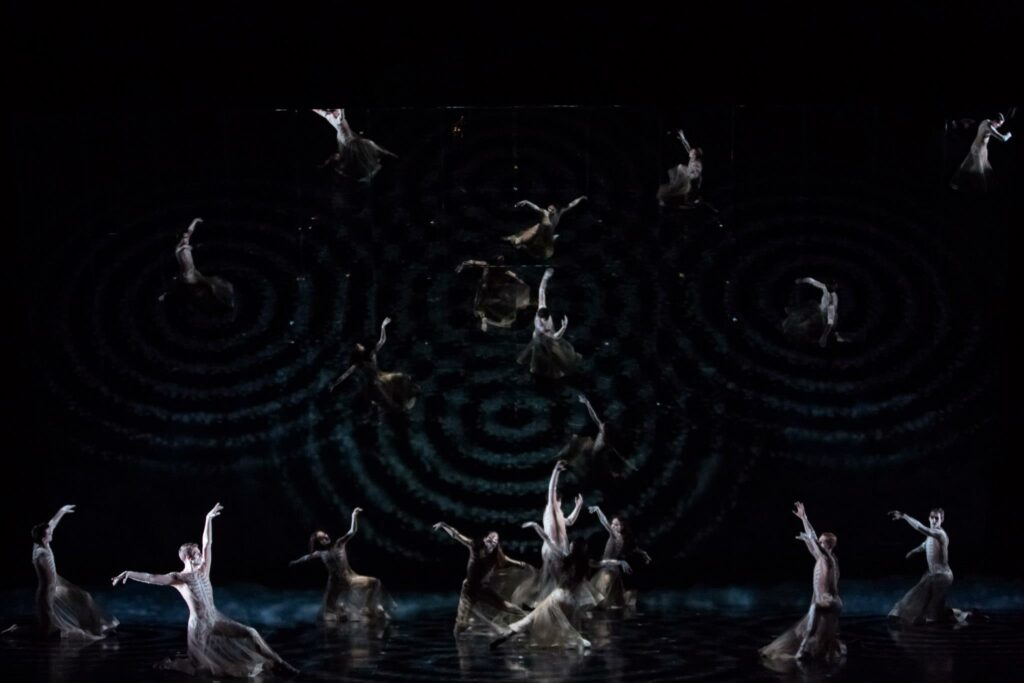 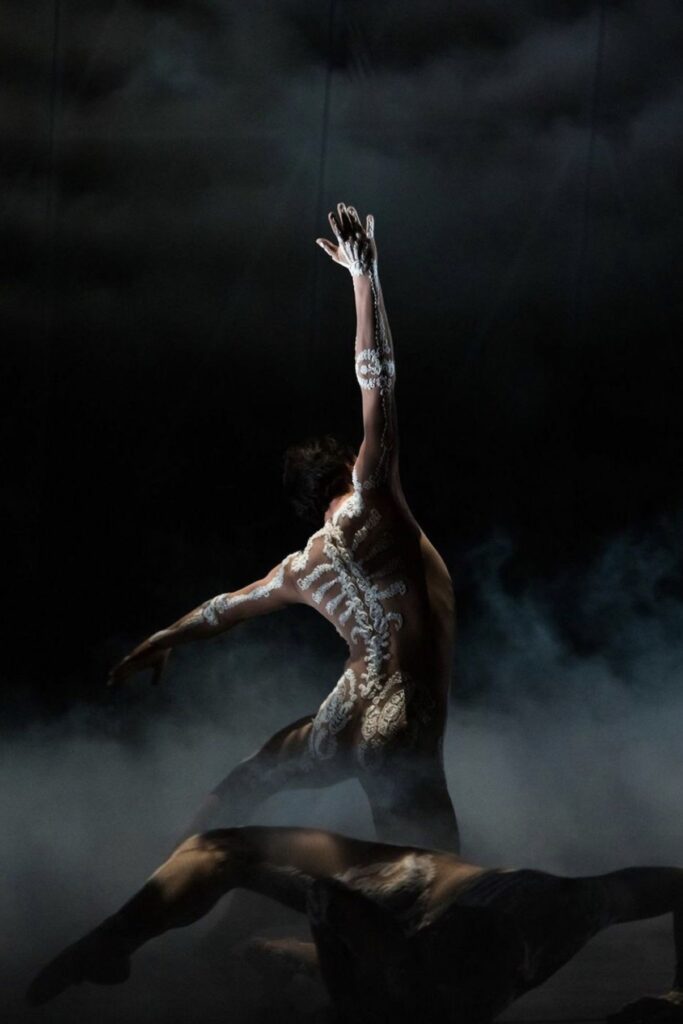 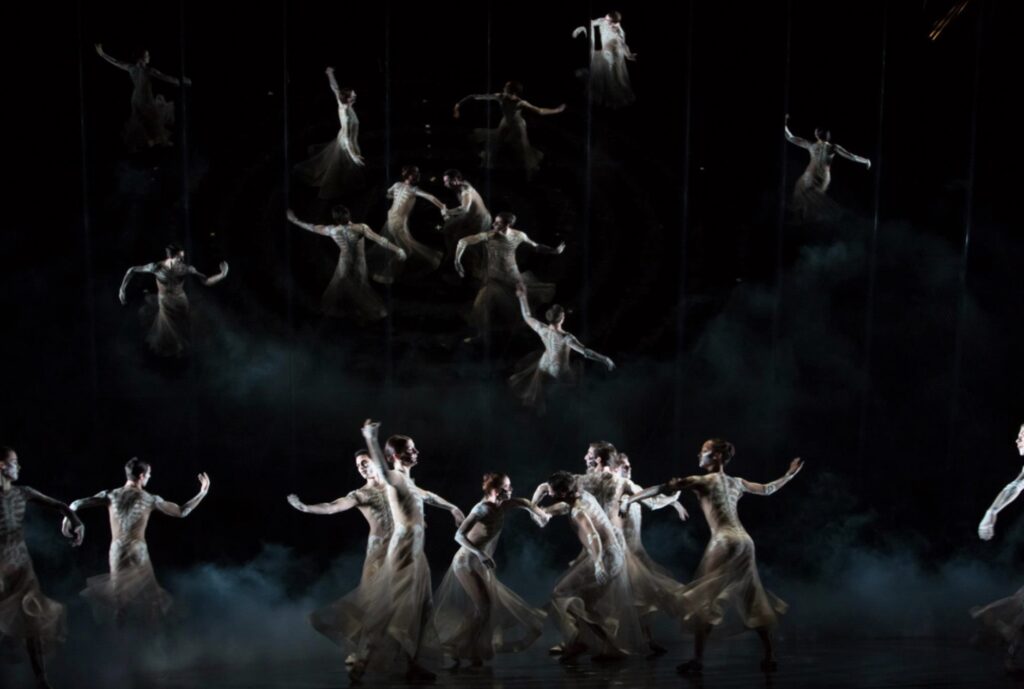 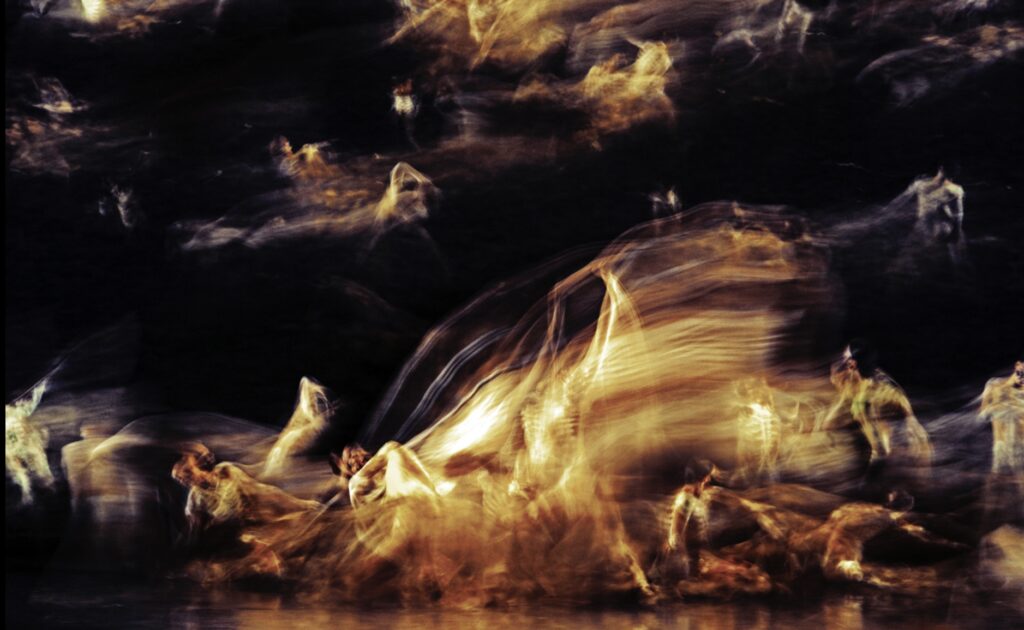 Retinal impressions of this “Bolero” persist long after the performance ending….Vertigo and mirage, Boléro takes the shape a bewitchement ritual and a race for ecstasy.
The alliance Cherkaoui Jalet and Abramovic has created an intriguing hybrid. If “Bolero” doesn’t truly resemble any of its creators, it bears the marks of each. Runaway bodies from Jalet Cherkaoui, who have worked together for thirteen years, physical and mental strength of the side of Abramovic, known for her dangerous performances.
A common point: extreme desire, less wild but more elegant . The gene injected into ballet movement mutated the choreography. Clear déboulés and pirouettes slip between the twisted falls to the ground. The result oscillates between a scientific disorder and altered grace. The orbiting of living bodies has nothing of a mechanical precision.

Bolero created by Cherkaoui and Jalet explodes as a finale. Caught between the black reflective floor and the mirror rising slowly above them, the eleven dancers appear like they are thousands! Like fireflies swirling, they seem to create their own light … or changing graphics and roses in their footsteps. In this whirlwind of Bolero, the meeting between Abramovic and Jalet Cherkaoui and Opera Ballet is becoming fusion…. everything is invention.
And if something is recognized, it is as much in the flexible and chained style of Cherkaoui-Jalet than the commitment of the principals (Aurélie Dupont, Marie-Agnès Gillot, Alice Renavand Jeremiah Bélingard, Vincent Chaillet) working collectively in the shadow of this splendid group piece.

How many choreographers have already failed while trying to adapt Bolero’s “Ravel”?
The new production by Sidi Larbi Cherkaoui and Damien Jalet together with Marina Abramovic and Riccardo Tisci, however, is brilliant….
Rarely have somber, yet delicate and romantic aesthetics been so contemporary, genuine and serious.

It was a daunting task for French choreographers Sidi Larbi Cherkaoui and Damien Jalet to follow such outstanding ballets with their creation, a new rendering of Boléro but they rose to the challenge. Together with the collaboration of Marina Abramovic, they choreographed a radically different version to that of the acclaimed and now legendary work of Maurice Béjart, in the company’s repertoire since 1970. … It was a fitting end to a superb evening.

The interpretation of Ravel’s Boléro showed me that the markers of modernity, the gate keepers of critical reinterpretations, will always show us ways to see things anew — recreating and reimagining — finally rejoicing in a contemporary relevance. That is, we could say after all, one of the purposes of all art.